It’s a very specific kind of communal, public grief so many of us are feeling now — a watery-eyed, devastating connection we wish we didn’t need to feel — at a time where you still can’t safely be with your community. It’s texting single expletives in a group chat (or […]

It’s a very specific kind of communal, public grief so many of us are feeling now — a watery-eyed, devastating connection we wish we didn’t need to feel — at a time where you still can’t safely be with your community. It’s texting single expletives in a group chat (or tweeting them out into the void). It’s barely getting to process the sting of an event that, even under the best circumstances would make you sad before you’re overwhelmed by the spiral of all the “what ifs,” warnings, predictions, and terror that activists have warned about for years — and doing it in a way that’s simultaneously extremely public (worse, extremely online) and extremely lonely. The worst of both worlds.

This is about the death of Ruth Bader Ginsburg, obviously. But it’s about everything else, too.

Because in 2020 and especially at this moment? Everything is about everything. We’re living in a moment with so much compounded grief that there is no way to functionally and effectively hold it all. There’s the heavy, wrong feeling that comes from knowing at least 200,000 of our fellow Americans have died from a virus (one that’s disproportionately harming our most vulnerable populations and showing the weakness of a healthcare infrastructure that leaves people without access to care in the first place). There are deep concerns about the chances of a fair election amid pandemic confusion, voter suppression, and soul-crushing apathy. There are the environmental threats looming without a clear path to making the changes that need to be made with our current legislative system. There’s racist violence against Black and brown people that take their own physical, mental, and economic tolls on their communities. And, of course, there’s the fear and disinformation from parallel truths threatening us all from seeking action for any of the above.

And in the end, these big exhausting things come alongside everyone being so bone- and soul-level tired trying to keep a roof over their heads, keep their kids cared for and safe, and maybe, when all of that is done, even tend to their own minds, bodies, and souls.

This is an overwhelming list, and it isn’t even complete. These things add up again and again and the toll they take is something that’s hard to fully understand or process. There are a lot of wounds to apply pressure to at this exact moment and we’re all in triage mode. So, no, the loss of Bader Ginsburg isn’t the beginning or end or climax of these fears and anxieties and this grief — but is it really a surprise if it’s one of the many blows that sends people staggering back a bit? The flood of emotions isn’t even about one person who served on a court making some good calls and some not-good calls. It’s about each intersecting tragedy that got us here.

And then there’s Ruth Bader Ginsberg. She’s been a meme, a personal and professional inspiration and, without a doubt, a warrior for using the courts to make progress in meaningful, lasting ways that we’re still benefitting from today. Her work with the American Civil Liberties Union as general council (and launching the org’s Women’s Rights Project) is responsible for countless rulings and pieces of legislation that gave women in the United States a fighting chance at equality under the law. From Reed v. Reed (which found that an Idaho legal code saying “males must be preferred to females” in deciding administrators of estates violated the 14th amendment’s equal protection clause) to the Equal Credit Opportunity Act in 1974 (allowing women to get credit cards in their own names), Ginsburg’s mark in deconstructing the codified gender discrimination in our legal system — a personal and political battle for her throughout her life — is undeniable.

As a woman who was far too often one of the only women in the room (and who wanted to see that forever changed), her life and career inspired countless people to “fight for the things that you care about, but do it in a way that will lead others to join you.” She had a workhorse sensibility that made her someone you wanted on your team, fighting for you.

And, on a smaller, human level, she was a beloved mother and grandmother and a woman who out of duty and love for her country and a commitment to her ideals worked while extremely sick and to her very last days. And even though it was work she truly and obviously loved, there’s a sadness to seeing any warrior in a situation where she needs to fight ’til her last.

So, of course, it feels ghoulish to even think about political jockeying and how to defend the courts in this exact moment: an 87-year-old life-long servant — a single, and yes fallible, person — has died after living a long life and doing the good she could with that time. And in a non-triage moment, there would be more space to consider the complications of legacies, the small joys that come with an extraordinary life, and what it means for the way we view our shared histories. And yet, with the system as it is and the courts being what they are, these are the conversations people are having — arguably the logical consequences of a system relying on an octogenarian cancer survivor to make sure millions of people feel even partially represented and protected by the country’s highest court.

Today, there’s speculation about what this moment means for the future of legislation in the U.S., the 2020 election, the future of Roe v. Wade, the Affordable Care Act (ACA), and future legislation that could bridge gaps in access to healthcare. And there’s out-of-the-court questions about how people can look after their own communities (and communities that aren’t theirs) when they can’t assume there is a safety net in the courts and these multiple crises continue to intersect with and exacerbate one another.

It’s in the last part that I’ve found the most comfort (if you can call it that) at this time: looking to my community and getting to work. I see clear and conscious moves to consider actions that need to be taken (no, not just telling already disenfranchised people to vote — though, voting rights makes up part of the puzzle). I see (especially among the women I know) a renewed energy to look for community-minded ways to provide mutual aid, to organize resources and give time, money, and attention where needed. Even if you’re new to taking political action, recognize that there are countless people doing this work every day and making meaningful support systems that will prove invaluable to allowing us to look after one another moving forward. Movements need momentum — and they need people who can turn their despair into the tedious, unsexy everyday organization that, with a bit of imagination and willingness to reassess broken harmful systems, builds a better, more just world.

There’s the famous Martin Luther King Jr. quote on the “arc of the moral universe.” Dr. King says it is “long, but bends toward justice.” Ginsburg cited this in her dissent for Shelby County v Holder (which notably gutted the Voting Rights Act of 1965) and added “if there is a steadfast commitment to see the task through to completion.”

So we hurt, because we’re living in a world that hurts, and we use whatever talents we have to do the work to the best of our abilities. And we see it through.

Tue Sep 22 , 2020
SANTA CLARA COUNTY, CA—If you’re looking to get tested for COVID-19, there’s now more lead time offered for scheduling an appointment through an improved online portal, according to county officials. Appointments can now be made at the rotating city-based sites a week in advance, and five days in advance at […] 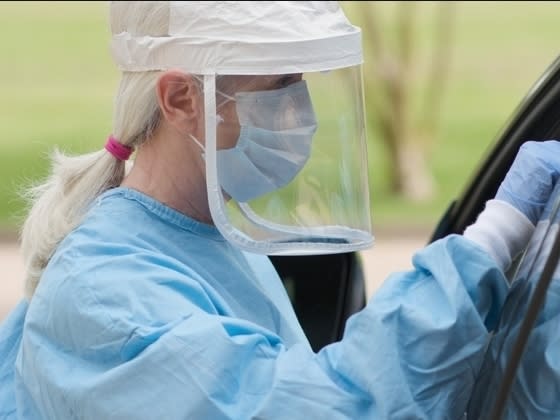