Dave Basulto had a good business going with sales of his iOgrapher iPhone case for filmmakers, selling thousands to schools across the country, based on in-person demos and meetings with teachers.  Then the pandemic hit, and he couldn’t travel, thus eliminating a huge chunk of his income.  So he was […]

Dave Basulto had a good business going with sales of his iOgrapher iPhone case for filmmakers, selling thousands to schools across the country, based on in-person demos and meetings with teachers.

Then the pandemic hit, and he couldn’t travel, thus eliminating a huge chunk of his income.

So he was forced to get creative, hustling from home to create a new gig, online seminars, and he turned to all the usual tools to sell them. Not just one – as in Facebook or Twitter, but everything: Instagram, YouTube, the “free e-book,” lead generator, blogging, vlogging, LinkedIn, you name it.

“I was very stressed when this started,” he says. “Our bread and butter are schools. I had to get the word out on something different.”

And with working at home eliminating in-person calls or appearing at trade shows as he’s done in the past, Basulto figured he just had to use everything at his disposal.

“I do them all because you never know where your customers are residing,” says Basulto. “Some hate Facebook, some hate emails, other like SMS etc. So since the cost is so low to enter you really need to be everywhere.”

The key is spreading the word. “You can have the best content in the world, but that’s only half the battle,” notes Austin based filmmaker Javier Mercedes, who hosts an online YouTube series called Passion in Progress. “The rest is all marketing, and to do it effectively, you have to be on all the channels.”

Zach Servideo, who hosts the Boston Speaks Up podcast goes even further. Recording the show about the local tech scene is the easy part, he says. The bulk of his time is spreading the word everywhere and anywhere, an exhausting process he admits “is not for everybody.”

The market, he notes, is completely fragmented. He gets some audience on Instagram, some from his RSS feed, some from the Medium blog posts he puts out weekly and more from what turned out to be his most successful outlet: LinkedIn.

Servideo spends much time creating graphic cards about his guests and placing them on Twitter, Instagram and LinkedIn to plug the episode. Example below:

Take a look at the platforms:

The largest social network, with over 1.66 billion daily users, but with a tricky algorithm that focuses on friends first can be be worked to promote yourself, but challenging to plug a brand. That is, unless you pay to advertise.

It may be President Donald Trump’s favorite social network to use (and disparage) but it doesn’t have the reach of Facebook. It averages 166 million daily active users, but is connected to thought leaders and journalists and, if shared with a re-tweet, can live on and resonate. Twitter is best for “engaging in an ongoing conversation,” and interaction says Tara Hunt, the CEO of Phlywheel, a marketing agency. Experts we’ve interviewed recommend tweeting often – as many as 10 times a day, or even 10 an hour, because Twitter is like a ticker tape and you’ve got to grab people’s attention when they’re there. Put it this way: Trump’s record of all-time tweets is 200 times in one day, on June 5th. So if you tweet 10 times in a day, that’s nothing to be ashamed about.

The downside to the Facebook-owned visual network is that you can’t put a link into a regular post, which makes it hard to use to drive traffic to your podcast, website, or latest YouTube video. There are several workarounds: you can say “Link in Bio,” and send people there to pick it up, or use the Story format to add a link, which is why so many people ask you to “Swipe up.” Even without the links, Mercedes says Instagram is helpful, just because there are so many people there and you keep your name in front of them.

The network for business has historically been thought of as a place to seek jobs and keep your resume up to date, but has taken on more of a business social network persona, where users can create daily posts with photos, videos and links and create instant messages to communicate with other members. “For business conversations, LinkedIn is the place,” says Hunt. And for selling product too. Basulto uses the platform for live broadcasting (more on that in a minute) and has been able to sell subscriptions to his online classes. “Coaches, entrepreneurs and others are there. It’s a powerful place.”

The holy grail for many people because it pays for content, with a share of the ad revenues, if you can amass at least 1,000 subscribers. Additionally, you can generate links to your content and embed the YouTube video in so many places.

Develop a list and you can turn a newsletter into profits. “I make money from my newsletter,” says Basulto, who averages a 1.5-3% return from sending out content to his list of 50,000. Hunt likes newsletters because “people who subscribe let you into their inbox in a more intimate way,” than on social media, and you’re not a slave to the algorithm and knowing whether or not people will see your post.

For those without products to sell, a newsletter is a great way to compile some of those social posts and thoughts, because not everybody saw your Facebook or Twitter. To create a newsletter, you’ll need a provider. Substack is a popular free tool that encourages writers to charge monthly subscriptions for newsletters, or to just offer it free to subscribers. An advantage over other platforms is that the newsletter lives in as an online blog post. CEO Chris Best says that one of the points of Substack is that it reduces the need to have multiple homes for your work by giving you one central venue, thus eliminating the need to hustle everywhere. However Best suggests using the Substack post as your content, since it can be linked, and plugging that everywhere online. “Tell people about it.”

Basulto’s newsletter and Twitter feed often touts a “free e-book,” offer, which is actually a “lead magnet,” he says. He creates a small book about filmmaking tips in Google Docs, adds some quick graphics, saves it as a PDF and makes it available via Dropbox. Within the book are links to buy other products from his website. To get the book, you subscribe, he gets the e-mail address “and now I have a new customer.”

Recording audio is just another way to get out your message, to keep your brand in front of people. The easiest (i.e. free) way to get your podcast going is via the app Anchor, which lets you record and edit directly from the app and distributes your show to Spotify, iTunes, Google Podcasts and other providers.

Facebook, Twitter and YouTube are the main platforms for live broadcasting and all are free, while LinkedIn is limited in that you need to register and await an invitation. Basulto says his took six months to arrive. Twitch is the platform for live gaming. The beauty of live is the interaction, says Basulto. “People like to hang around and ask questions,” which means he gets to sell more products.

Have questions about the online hustle? Let me hear from you on Twitter, where I’m @jeffersongraham

Sat Jun 13 , 2020
The coronavirus pandemic has thrown millions of Americans into chaos, negatively affecting financial well-being alongside physical and mental health. As unemployment rates soar and money insecurities abound, a new NerdWallet survey finds almost half of Americans (48%) are indeed feeling less confident about their personal finances due to COVID-19. In […] 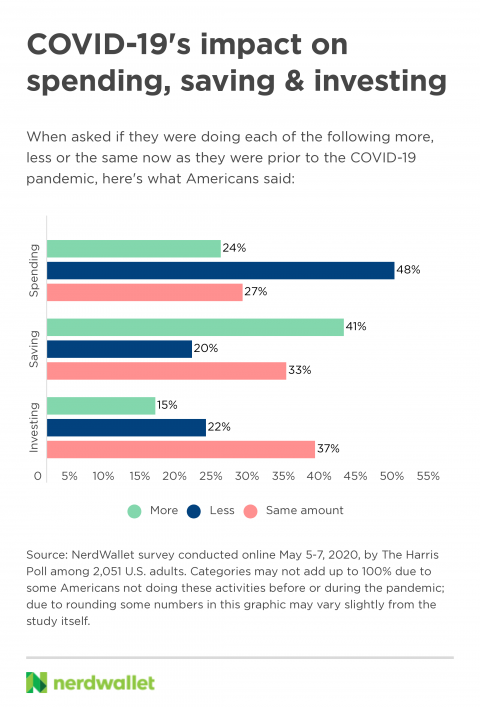