A popular argument has emerged in recent days for playing college football. It goes like this: If college football isn’t played, college football players will still be at risk of catching the virus; in fact, they could be at greater risk. Alabama coach Nick Saban joined that chorus today: “Look, […]

Alabama coach Nick Saban joined that chorus today: “Look, players are a lot safer with us than they are running around at home. We have around a two-percent positive ratio on our team since the Fourth of the July. It’s a lot higher than that in society. We act like these guys can’t get this unless they play football. They can get it anywhere, whether they’re in a bar or just hanging out.”

Here’s the problem with this argument, beyond the fact that only one of the play-or-don’t-play options allows coaches and others connected to college football to be realize the revenue from a season of college football. Unless each program is as buttoned up as Michigan and/or every NFL team when it comes to limiting the spread of the virus and/or acting properly when someone tests positive, a college football becomes a potentially significant source of potential spread of the virus in its community, with players passing it around to each other and to coaches and staff, and then all of them taking it out of the building and giving it to others.

Yes, the players can (and probably will) engage in risky behaviors if football doesn’t happen. Their schools’ football programs won’t be enhancing that risk, however — especially if the schools will be having online-only classes this fall, allowing the players (and other students who would be gathers for super-spreader house parties) to live in a place other than the town their colleges are located.

Also, don’t overlook liability concerns. Although it will be very difficult if not impossible to link illness and/or death by a player (or a player’s family member) to the football program given the wide scope of avenues for catching the virus, the legal system eventually will be tasked with creating a proper standard for parsing out accountability when it comes to the failure of businesses and other organizations to engage in reasonably prudent activities. Quite possibly, strict proof of proximate causation will go out the window; if a business or organization can be shown to have failed to put proper measures in place (with those proper measures determined by the courts after the fact), liability could be imposed based simply on showing that a given player, coach, and/or staff member was exposed to an environment that, for example, lacked sufficient testing, contact tracing, social distancing, face coverings, etc. to limit the spread of the virus.

Even if a school currently thinks it’s doing enough in that regard, the school may later find out the hard way (and the very expensive way) that it wasn’t. That’s a very real risk with incredibly long-term potential consequences, from legal fees paid to defend against the claims to eventual settlements and/or verdicts and protracted fights with insurance companies that, above all else, won’t want to pay anything for such claims. In the end, the financial damage to a given school could be much, much more significant than the losses from one lost season of football.

Then there’s the question of ethics. Even if the kids will put themselves at some degree of risk on their own, does that make it right for the schools to do so instead? Sure, some of the kids will put themselves at even greater risk if they’re not practicing and playing football. But, depending on the quality of the safety programs, they’d still be placed at some degree of risk if they play football.

Finally, let’s not assume that all 18-, 19-, and/or 20-year-olds are knuckleheads. Maybe some aren’t doing reckless, stupid, and/or selfish things that would expose them to the virus. Besides, if/when the COVID hits the fan in the form of a lawsuit, bet your bottom dollar (and some schools could be digging nearly that deep) on any player or family member who sues painting the picture of someone who was engaged in anything but risky behavior away from the program, forcing the colleges into the unseemly position of having to prove that its players were, in reality, even more reckless, stupid, and/or selfish than the average 18-, 19-, and/or 20-year-old.

So, yes, the argument advanced by folks like Nick Saban (who has several million reasons to see the season proceed) makes sense on the surface. At various deeper levels, it’s a much tougher sell.

Tue Aug 11 , 2020
The focus on the stock price gyrations of electric truck startup Nikola Corporation (NASDAQ: NKLA) overlooks a major part of its business plan-making and selling hydrogen fuel for its fuel cell trucks and anyone who wants it. “Hydrogen is a key to everything with Nikola,” says Executive Chairman Trevor Milton. “It’s […] 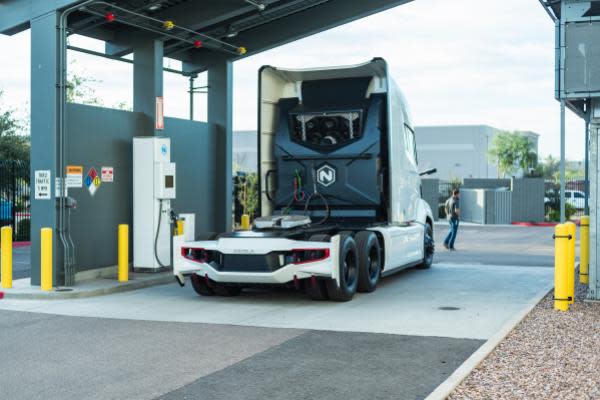