Last week, The Watchdog found himself in a most uncomfortable position. I asked Santa Claus if he was a scammer. I was interviewing the NorthPark Center Santa about plans for his 2020 virtual appearances on behalf of the luxurious Dallas mall where he has served in that capacity for more […]

Last week, The Watchdog found himself in a most uncomfortable position. I asked Santa Claus if he was a scammer.

I was interviewing the NorthPark Center Santa about plans for his 2020 virtual appearances on behalf of the luxurious Dallas mall where he has served in that capacity for more than 30 years.

Due to the coronavirus, this is the first year there will be no long line, no sitting on Santa’s lap. Instead, NorthPark Center leaders worked hard to come up with alternate plans.

This year, families will make an appointment for a video call with Santa, live from the North Pole. At the appointed time, anyone in the family can join the online call no matter where they are (ho-ho-ho, Grandma!). Afterward, the family can download a photo and a video of the call.

The cost starts at $24.95, and all money raised will be donated to Children’s Health system in Dallas.

I testify that this is the deal of the year. From my own personal experience with NorthPark’s Santa, his value is not $24.95. It’s closer to $2,495. I’ll show you why.

But first, The Watchdog must address this ridiculous scam allegation.

“What a scam,” the critic wrote. “There will be plenty of other Santas that you can ACTUALLY PHYSICALLY see. So stupid. Hopefully, no one is stupid enough to pay for this stupidity.”

In rebuttal, several comments defended NorthPark Santa, whom some believe to be a North Texas icon as beloved as Big Tex.

“Bravo NorthPark for doing the responsible thing,” Don Hall writes in the comments.

I won’t share the name of the person who accused Santa of running a scam. Even though she posted on a public Facebook page, if I were to print her name, Santa might put her on the naughty list for life. I’ll just call her Scrooge.

Scrooge misses two important points. The first is if she thinks she can find another mall Santa whose lap her little Scroogies can sit on this year, she’s drinking too much spiked eggnog.

Second point is she has no understanding of the extraordinary abilities of NorthPark Santa, a trained psychologist, a Dr. Santa shrink who, in his own words, offers “some guidance, some words to live by” on each visitor’s personal situation.

Last week, when I spoke to Santa by phone, I apologized for asking about Scrooge’s comments. The phone connection to the North Pole was scratchy, so I had a little trouble hearing him.

He defended the pandemic plan. “Many of the elf organizations are advising against having kids come visit Santa,” I thought I heard him say.

I stopped him to ask: “There are elf organizations?”

He continued, “Not only is there a risk of transmission between Santa and the children or some child giving it to Santa and Santa passing it on, there’s also the risk of waiting in line.

“Plus, if I were to get sick, that knocks me out for the whole rest of the season.”

The alternative solution, he said, was to put Santa behind Plexiglas, but that would be “like Santa was in jail.”

The Watchdog hesitates to make recommendations of roofers, plumbers, lawyers, property tax consultants and electric companies. But I will easily go on record as saying the NorthPark Santa is the best.

Hundreds of thousands of Texans who’ve visited him for his more than 30 years at the mall already know that.

When I moved here 27 years ago, I was a discombobulated mess. I’d never been to Texas and felt out of place. I didn’t know if chicken-fried steak was chicken or steak. When I went to the Western wear shop, I asked for a pair of cowboy dungarees. Fajitas, and how to make them, were a big mystery.

But I read about this Santa shrink and, looking for a good newspaper story, I went to see him. There were 100 parents and children in line ahead of me. I stood behind a ponytailed girl wearing a shirt that said, “Santa, I was a perfect angel.”

When I reached the front, I told Santa I was a columnist looking for answers. He said his shift was almost over, and I should wait.

Minutes later, he invited me into Santa’s private locker room and offered me a stool to sit. He asked me what I wanted for Christmas.

Then he spoke, and I took notes.

“You are in a unique position. You can create your own traditions. It probably won’t fit to redo the old ones because you are in a different place.

“You might let your imagination wander. Even pay attention to your dreams and see what comes up in terms of ways you might enjoy celebrating the season.

“You also might want to look inside and ask yourself, ‘What’s the meaning of the season all about? How do I want to express this in my life and come to some kind of more deeper, personal understanding?’”

I was beginning to understand: “So a Texas Christmas can become the opening for a better Christmas for me?”

“Yes,” Dr. Santa replied. “Maybe a deeper, more fully understood, expressed and felt Christmas. Perhaps, if you’re willing to take that look at it, and see what it means to you.”

As I stood to leave, he added encouragement: “I’m not a Texan myself, but I feel at home here.”

The next Christmas, 1994, I waited in line again, this time with my fiancée, Karen. I introduced them and told Dr. Santa I had proposed to Karen, her two young children and their neurotic man-hating dog, Sadie, in a newspaper column.

Last week, in our phone call, I asked Santa what he remembered about me. It’s been 27 years.

“That you felt somewhat out of place,” he answered, “spending Christmas in a new place and feeling a little out of touch with your old traditions.”

Then he added, “Was there something about a dog, too?”

What a deal! This is no scam. This is the best Santa ever, for Christmas sakes.

Mon Nov 16 , 2020
By Ritsuko Ando TOKYO (Reuters) – Walmart Inc is selling a majority stake in Japanese supermarket chain Seiyu to investment firm KKR and e-commerce company Rakuten for over $1 billion, after years of struggling to make money amid stiff competition. The deal, which values Seiyu at 172.5 billion yen ($1.65 […] 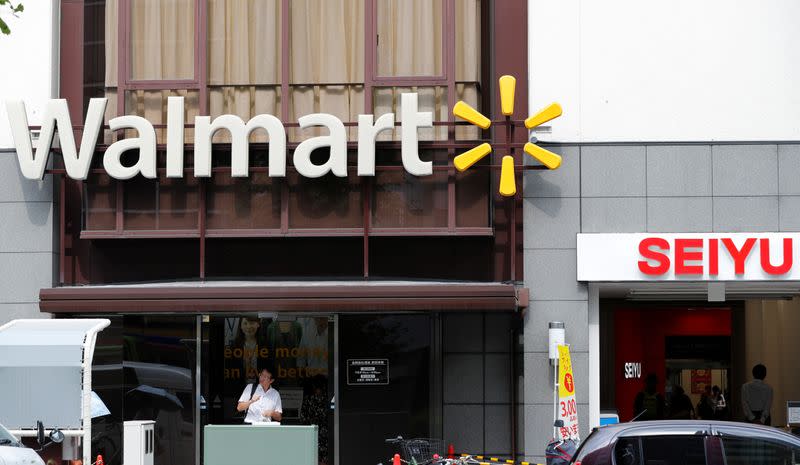