(Bloomberg) — Deutsche Lufthansa AG and the German government wrangled for weeks before agreeing on a 9 billion-euro ($10 billion) bailout for the cash-strapped airline. Now one man could bring the deal crashing down. Heinz Hermann Thiele, a 79-year-old billionaire, has amassed a stake in the carrier of about 15.5%, […]

Deutsche Lufthansa AG and the German government wrangled for weeks before agreeing on a 9 billion-euro ($10 billion) bailout for the cash-strapped airline. Now one man could bring the deal crashing down.

Heinz Hermann Thiele, a 79-year-old billionaire, has amassed a stake in the carrier of about 15.5%, making him the largest shareholder. While his intentions are unclear, he has expressed dissatisfaction with the rescue plan, saying equity investors deserve better.

The moves put Thiele at the center of Germany’s biggest corporate bailout of the coronavirus era just days before a shareholder vote that the airline has said could fail. Insolvency would be the most likely outcome should investors block the rescue, Lufthansa warned Wednesday. Unions, many investors and proxy advisory firms recommend shareholders back the deal.

Yet Thiele, a former army tank commander, may have enough ammunition to shoot down the bailout — should he choose to do so.

If less than 50% of shareholders show up to vote at the online meeting on Thursday — a possibility, given that attendance at the firm’s May AGM was 33% — Thiele’s holding could be enough to deny Lufthansa’s management board the two-thirds majority it needs.

Why he would want to tip the airline into insolvency is less clear, as it would be disastrous for Thiele’s own 750 million-euro stake as well as other investors’ holdings.

Further muddying the picture, the mogul appears to be building a war chest. He announced Thursday a plan to sell 8 million shares of Knorr-Bremse AG, the Munich-based brake-maker that underpins his fortune. The move will provide about $850 million in cash as he considers his next move.

The proceeds of the sale will be used “to support Mr. Thiele’s other private investments,” his KB Holding GmbH said. A spokeswoman for Thiele declined to comment.

Like airlines the world over, Lufthansa is fighting for survival after the coronavirus grounded fleets and punctured a decades-long aviation boom. The company has said it’s losing 1 million euros an hour and would run out of cash in weeks without government aid.

Germany this month offered a package of loans and investments to keep the nation’s flag carrier aloft. Even so, the airline has said it may have to shrink its fleet by 100 jets and jettison 22,000 of its 140,000 or so employees.

Thiele increased his stake in Lufthansa to 10% in March, and raised it above 15% this month, making it his second-biggest holding in a listed company. His dealings in the airline mark a high-profile move for a media-averse billionaire with modest beginnings.

He started at Knorr-Bremse in 1969 as a legal specialist in the patents department, and rose through the ranks before buying the company in 1985. At that point, Thiele hadn’t even repaid the mortgage on his house, he said in an interview with the Frankfurter Allgemeine newspaper.

He and his family pocketed around 3 billion euros from the initial public offering of Knorr-Bremse in 2018, and he still owns a majority stake in the manufacturer. All told, he’s the nation’s third-richest individual with a fortune of around $16.7 billion, according to the Bloomberg Billionaires Index.

Thiele, who as a panelist at a Bavarian Industry Association event in 2018 called Chancellor Angela Merkel “autocratic,” tends to make investment decisions by himself without consulting advisers, people who have worked with him said.

While his approach worked on Knorr-Bremse, it hasn’t always turned out so well. Since he started building a stake in German rail company Vossloh AG in early 2011, the shares have fallen about 59%.

He controls his holdings in both firms through his family office, Stella, which hired Linde Group’s former head of pension investments, Christoph Schlegel, around the start of this year as its chief investment officer.

In an interview with FAZ, Thiele indicated he’s disgruntled that the Lufthansa bailout favors German taxpayers over the company’s shareholders, and wants the terms altered.

Mindful of public anger over banking bailouts in the wake of the financial crisis, Germany’s finance minister, Olaf Scholz, demanded Lufthansa issue a 20% stake to the government at the nominal price of 2.56 euros a share. That’s the piece of the package shareholders will vote on Thursday, and the part that led Thiele to accuse the state of profiteering.“The federal government should confine itself to the financial aid packages, which are fundamentally very positive, and should not grow into the role of a return-oriented investor,” Thiele said in the FAZ interview.

Lufthansa and government officials declined to comment. Scholz has said the deal isn’t open for renegotiation.

If Thiele sees an opening to unpick a package that took weeks of tortuous negotiations, that could be the fault of Peter Altmaier, Germany’s economy minister, who said publicly in early May that the airline would be saved at any cost. Those remarks raised eyebrows among government negotiators who were trying to convince Lufthansa they had no choice but to accept the terms on offer.

Thiele’s goal with his Lufthansa stake might be to win publicity, or to show he’s still a great investor, people who have worked with him said. But he’s keeping his cards close to his chest, sparking speculation as to whether he simply intends to push for better terms or do something more dramatic, such as torpedo the deal and replace the government in the bailout, making him the dominant shareholder in one of the country’s most storied firms.

Whatever his intentions, he’s causing alarm among investors and other Lufthansa stakeholders, including employees.

“I call on all shareholders to register to vote and support this financial lifeline,” said Marcus Wahl, president of the VC pilots’ union. “You’re deciding on the survival of the company and its employees,” said Nicoley Baublies, an official at the UFO cabin crew union.

SC Gov. McMaster takes side on Strom, but not on colleges’ push to change building names

Sat Jun 20 , 2020
As a powerful movement builds across South Carolina to remove the names of monuments to racists and segregationists from university buildings and public squares, the state’s top elected official has so far been publicly silent on whether a 20-year-old law preventing those erasures without support of a super majority of […] 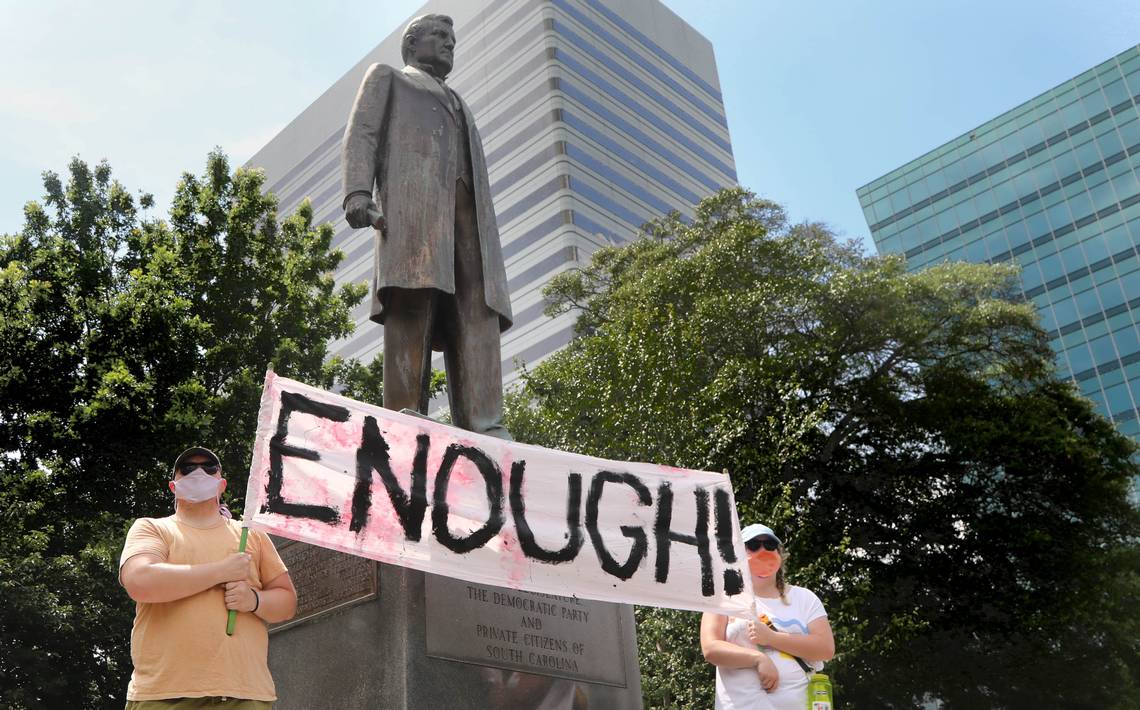