Mr. Hsieh was reported injured in a house fire on Nov. 18 while visiting family members in New London, Conn. New London Fire Chief Thomas Curcio told the Day newspaper in Connecticut that firefighters rescued a victim trapped in a waterfront house. The victim, not specifically identified as Mr. Hsieh, […]

Mr. Hsieh was reported injured in a house fire on Nov. 18 while visiting family members in New London, Conn. New London Fire Chief Thomas Curcio told the Day newspaper in Connecticut that firefighters rescued a victim trapped in a waterfront house. The victim, not specifically identified as Mr. Hsieh, was flown by helicopter to the burn unit of a hospital in Bridgeport, Conn.

In 1995, Mr. Hsieh (pronounced “shay”) was a recent Harvard graduate when he and a college friend, Alfred Lin, founded Link Exchange, an online advertising company. They sold the business to Microsoft in 1998 for $265 million.

Mr. Hsieh, then 24, launched a venture capital firm with Lin and became an early investor in OpenTable, the online restaurant reservation company. In 1999, he invested in a San Francisco online retailer called ShoeSite.com, founded by Nick Swinmurn. Mr. Hsieh took over as chief executive, with Lin becoming chief operating officer.

They changed the company name to Zappos — derived from the Spanish word for shoes, “zapatos” — and made it into an innovative and far-reaching company. Zappos became the country’s largest online shoe store before expanding into clothing, jewelry and other items.

Mr. Hsieh overcame customer skepticism about buying shoes online by offering free shipping and returns. Drawing on a sense of idealism and community spirit, he adopted an approach built on exceptional customer service while attempting to make Zappos an inviting place to work.

Salaries were often less than those at other tech companies, but employees enjoyed generous benefits, including full health-care coverage, free lunches and on-site chiropractors and life coaches, ready to dispense a hug.

“It was about: What kind of company can we create where we all want to be there, including me?” Mr. Hsieh told the New Yorker in 2009. “How can we create such a great environment, where employees get so much out of it that they would do it for free?”

He put considerable emphasis on building a corporate culture that put people first, with one of the company’s core values being to “create fun and a little weirdness.” One of Mr. Hsieh’s greatest talents, colleagues said, was his ability to observe human behavior and judge character. Zappos was often cited as one of the country’s best places to work.

“We believe that a company’s culture and a company’s brand are really just two sides of the same coin,” Mr. Hsieh told the Las Vegas Review-Journal in 2009. “If you get the culture right, then most of the other stuff will happen on its own.”

Zappos grew quickly but was not immediately profitable. At one point, Mr. Hsieh paid himself a monthly salary of $2. In 2004, he moved the Zappos headquarters from San Francisco to Henderson, Nev. He sold his house to help finance an 800,000-square-foot warehouse in Kentucky, equipped with robots and high-tech equipment to ship packages to customers.

The quickly growing company did not reach profitability until 2006, but by 2008 it recorded $1 billion in sales, two years ahead of schedule. In 2009, Zappos was bought by Amazon (whose founder and CEO, Jeff Bezos, owns The Washington Post) for $1.2 billion. Mr. Hsieh had stayed on as chief executive until August.

“Your curiosity, vision, and relentless focus on customers leave an indelible mark,” Bezos wrote on Instagram. “You will be missed by so many, Tony.”

In 2009, Mr. Hsieh launched a $350 million program called the Downtown Project, in an effort to transform Las Vegasbinto a vibrant hub for technological innovation and an enjoyable place to live. His company moved its headquarters into the old Las Vegas city hall.

“It’s the Downtown Project’s big bet that a focus on collisions, community, and colearning will lead to happiness, luckiness, innovation, and productivity,” Mr. Hsieh told Wired magazine in 2014. “It’s not even so big a bet. Research has been done about this on the office level. It’s just never really been applied in a consolidated way to a city revitalization project.”

To Mr. Hsieh, Zappos was more than an online store. He often used the term “movement” to describe the company and its non-hierarchical organizational structure.

He became one of the country’s most popular speakers at corporate conferences, delivering a message that was part business executive, part self-help and part canvas-tent revival preacher.

“What would you be passionate about doing, even if you never made a dime?” he told one group in 2009. “What is your goal in life? For almost everyone, it comes down to happiness.” Then, with a yellow smiley face depicted on the screen behind him, he asked, “What if you could go straight to the happiness?”

His supporters and co-workers sometimes called themselves Zapponians, but as with any idealistic society, there was inevitably some grit and disillusionment clouding the golden fantasy. Swinmurn, who founded the forerunner of Zappos, left the company in 2006, saying he was fed up with “meetings about meetings.”

Lin, Mr. Hsieh’s friend who was the chief operating officer, departed soon after the company was bought by Amazon. Others noted that the Zappos culture was dominated by young men and revolved around trips to local bars — where Mr. Hsieh joined the crowd in knocking back shots of whiskey or vodka.

The company did not hire its first top female executive, a chief financial officer, until 2016.

In 2014, Mr. Hsieh dispensed with managers in a new organizational structure called “holacracy,” in which employees defined their own jobs and worked in corporate “circles.” Employees who didn’t buy in to the new system were told to take a buyout. Almost 20 percent of them did just that and left the company.

The Downtown Project in Las Vegas also began to struggle, and Mr. Hsieh relinquished his role as leader. Several of the high-tech firms he had helped lure to Las Vegas shut down when the venture capital ran out.

Nonetheless, Mr. Hsieh hoped that the Zappos business and “movement” he had created would survive after he left the company.

“For any company or movement or religion or whatever, if there’s one person that personifies it then that puts that company or vision at risk, if the person, say, dies,” he said in 2009. “What’s going to happen to Apple if something happens with Steve Jobs? That’s why it needs to be about a movement, not about a person or even a specific company.”

Anthony Chia-Hua Hsieh was born Dec. 12, 1973, in Urbana, Ill. He was 5 when his family moved to Marin County, Calif. His father was a chemical engineer, his mother a neuropsychologist.

As a child, Mr. Hsieh skipped practicing the piano and violin by recording himself, then playing the tapes to deceive his parents. As a student at Harvard, he started his first company, delivering late-night pizzas to students. He later learned that Lin, his future business partner, resold the pizzas by the slice to other students.

Mr. Hsieh had two brothers, but a complete list of survivors could not be confirmed.

After receiving a bachelor’s degree in computer science in 1995, Mr. Hsieh moved to San Francisco, working briefly for Oracle before launching Link Exchange. When the company grew too large, Mr. Hsieh said he lost interest, vowing that his next business would be a place where people would love working.

It was just happenstance that Zappos sold shoes.

Sun Nov 29 , 2020
EAU CLAIRE, Wis. (WEAU) – Today is Small Business Saturday and this year’s event seemed more important to support than ever before. Ben Polzin of Down to Earth Garden Center told WEAU, “2020 has been an interesting year. A lot of ups and downs, concerns, sleepless nights.” Small business owners […] 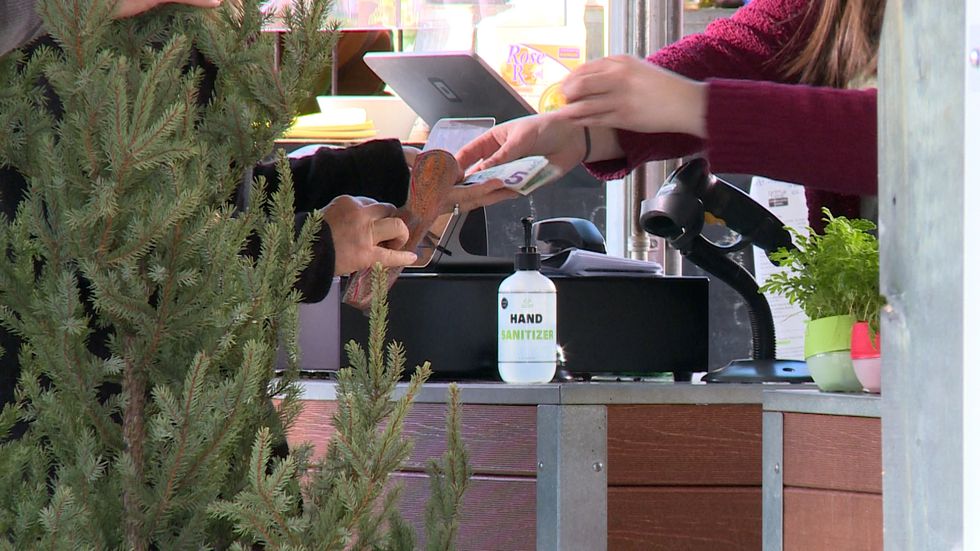