(Bloomberg) — Donald Trump gave his blessing to Oracle Corp.’s bid for the American operations of TikTok, putting the popular video-sharing app on course to escape a U.S. ban imposed as part of his pressure campaign against China. “I approved the deal in concept,” Trump told reporters Saturday as he […]

(Bloomberg) — Donald Trump gave his blessing to Oracle Corp.’s bid for the American operations of TikTok, putting the popular video-sharing app on course to escape a U.S. ban imposed as part of his pressure campaign against China.

“I approved the deal in concept,” Trump told reporters Saturday as he left the White House for a campaign rally in Fayetteville, North Carolina. “If they get it done, that’s great. If they don’t, that’s OK too.”

The new company, which will be called TikTok Global, has agreed to funnel $5 billion in new tax dollars to the U.S. and set up a new education fund, which Trump said would satisfy his demand that the government receive a payment from the deal. “They’re going to be setting up a very large fund,” he said. “That’s their contribution that I’ve been asking for.”

Oracle plans to take a 12.5% stake in the new TikTok Global, while Walmart Inc. said it has tentatively agreed to buy 7.5% of the entity. Walmart’s Chief Executive Officer Doug McMillon will serve on TikTok Global’s board of directors, the retailer said in a statement. Four of the five board seats will be filled by Americans, according to the statement.

TikTok’s Chinese owner ByteDance Ltd. is seeking a valuation of $60 billion for the app, according to a person familiar with the matter. Oracle and Walmart would pay a combined $12 billion for their stakes if they agree to that asking price. The final valuation had not been set as the parties worked out the equity structure and measures for data security, the person said. Terms are still in flux and the proposed valuation could still change.

U.S. Secretary of State Michael Pompeo characterized Bytedance’s proposed role as similar to a “passive shareholder.” The Chinese company would have “no decision-making authority, no ability to peer into” what the U.S. company is doing, he said on Fox News’ “Sunday Morning Futures.”

The TikTok deal was forced by a pair of bans Trump issued in August over concerns that ByteDance posed a national security risk, thrusting the video-sharing app into the center of the president’s confrontation with Beijing.

Shortly after Trump signaled his approval, the Commerce Department on Saturday delayed by a week a ban that would have forced Apple Inc. and Alphabet Inc.’s Google to pull the TikTok video app from their U.S. app stores on Sunday.

Trump is ramping up pressure on Chinese-owned apps in the weeks before the Nov. 3 presidential elections, citing national security concerns about the data U.S. citizens provide to them and the potential for Beijing to use them for spying. The president is trailing his opponent Joe Biden in polls and has sought to portray himself as tougher on Beijing than the Democrat.

TikTok said in a statement that it was “pleased that the proposal by TikTok, Oracle, and Walmart will resolve the security concerns of the U.S. administration and settle questions around TikTok’s future in the U.S.”

The company confirmed Oracle will host all its U.S. data and secure its computer systems. Oracle’s Generation 2 Cloud fully isolates running applications and responds to security threats autonomously, according to the statement, which eliminates the risk of foreign governments spying on American users or trying to influence them with disinformation.

“Oracle will quickly deploy, rapidly scale, and operate TikTok systems in the Oracle Cloud,” said Oracle CEO Safra Catz in a statement. “We are a 100% confident in our ability to deliver a highly secure environment to TikTok and ensure data privacy to TikTok’s American users.”

Oracle will get full access to review TikTok’s source code and updates to make sure there are no back doors used by the company’s Chinese parent to gather data or to spy on the video-sharing app’s 100 million American users, according to people familiar with the matter.

The deal, if approved, ensures “that no American’s data has any access to anyone in China that has any capacity to move this to a place we don’t want it,” Pompeo said.

“We will ensure that that firewall is real, that the protection is serious, that the data resides in places that aren’t connected to the Chinese information system,” he said.

TikTok Global, together with Oracle, SIG, General Atlantic, Sequoia, Walmart and Coatue will create an educational initiative to develop and deliver an online video curriculum driven by artificial intelligence, according to the statement.

TikTok said it’s working with Walmart on a commercial partnership and said that it will take part in a TikTok Global financing round along with Oracle before an initial public offering in which the investors can take as much as a 20% cumulative stake in the company.

TikTok Global will likely be headquartered in Texas and will hire “at least” 25,000 people, Trump said. TikTok will need to hire thousands of content moderators, engineers, and marketing staff that were previously located in China and around the world. The company will also pay more than $5 billion in new tax dollars to the Treasury, according to the statement.

To sweeten the deal for Trump, TikTok promised to hire an additional 15,000 jobs, more than the 10,000 positions the company already pledged to fill earlier this year. It’s unclear if there’s a timeline to achieve that target, or guarantees that it will follow through. Facebook Inc., the largest U.S. social media company, employed about 45,000 people in 2019, while Twitter Inc. employed only 4,900, according to data compiled by Bloomberg.

Proponents of the deal told the Trump administration that the new company would be controlled by American investors by counting the passive stakes of existing shareholders in TikTok’s Chinese parent, people familiar with the matter said. Although ByteDance will have an 80% stake in the new company, existing U.S. investors hold a 40% stake in ByteDance. That tallies up to 53% ownership by U.S. companies and investors — although that doesn’t entail majority control or voter rights, the people said.

TikTok Global, which will be an independent company, will hold an initial public offering in less than 12 months and the stock will be listed on a U.S. exchange, according to the statement. After going public, U.S. ownership of TikTok Global will increase and continue to grow over time, it added.

While the Chinese government must now sign off on the transaction for it to go forward, as of earlier this week, ByteDance was growing increasingly confident that the proposal would pass muster with Chinese regulators, people familiar with the matter told Bloomberg.

Early reaction from Chinese state media appeared positive. “This scheme is still unfair, but it avoids the worst result, that TikTok is shut down or sold to a U.S. company completely,” wrote Hu Xijin, the influential editor in chief of China’s state-owned Global Times.

Under the terms of the agreement reached early in the week, ByteDance would retain a majority of TikTok’s assets and control over the algorithm, with Oracle and other U.S. investors taking minority stakes.

Trump seemed to contradict that on Saturday. “It will have nothing to do with China, it’ll be totally secure, that’ll be part of the deal,” he said. “All of the control is Walmart and Oracle, two great American companies.”

Trump spoke with Oracle Chairman Larry Ellison and Walmart’s McMillon on Friday, telling them he still expected the U.S. government to receive a cash payment as part of the transaction, according to people familiar with the matter. They agreed to the educational donation as a way to satisfy Trump’s demand, one of the people said. ByteDance first heard about the $5 billion education fund from news reports, a company spokeswoman said.

The deal came together last weekend, the result of high-level negotiations between ByteDance, Oracle and top Trump administration officials after ByteDance rejected a bid from Microsoft Corp. and Walmart to buy the U.S. TikTok service outright.

Beijing has signaled it would greenlight a deal as long as ByteDance doesn’t have to transfer the artificial intelligence algorithms that drive TikTok’s service, Bloomberg has reported.

The Treasury Department said the deal is subject to a security agreement that requires approval by the Committee on Foreign Investment in the U.S., or Cfius. The term sheet that’s been negotiated between Cfius and the companies will now have to be formalized in a document that details the mechanics for implementing the terms of the deal.

That document would likely include requirements related to the establishment of the new company, arrangements governing its relationship with ByteDance, whether an IPO is part of the deal, whether ByteDance will have to divest its entire stake in the IPO and what would happen if for some reason the IPO doesn’t occur, said Aimen Mir, a lawyer at Freshfields Bruckhaus Deringer LLP and a former deputy assistant secretary for investment security at Treasury.

In a video posted on TikTok with the caption #WeAreTikTok and we are here to stay, interim head of TikTok Vanessa Pappas thanked users for “sticking by us,” she said. “We’re here for the long run.” In the comments below, users said they were happy that the ongoing drama around the ban would subside. “This on and off situation is working on my nerves,” said @iamdavante, who has 4.1 million followers on the video app.

(Updates with Pompeo comments in sixth and 14th paragraphs.)

Money laundering is a dirty, even deadly business. Miami plays a huge role

Sun Sep 20 , 2020
Emily Spell heard the screams from outside her parents’ red brick home. She found her brother, Joseph Williams, 31, splayed on a mattress in the basement. His eyes, half open, were yellow. His lips were blue. “Joe, wake up! Joe, wake up!” his wife, Kristina, hollered, while pounding on his […] 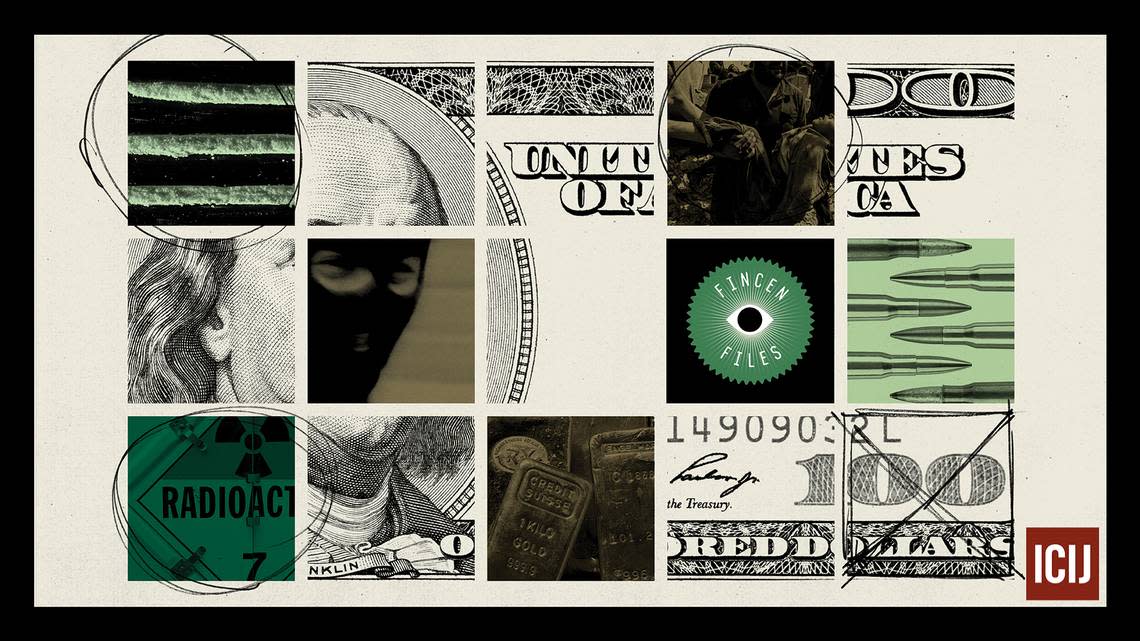