President Donald Trump is considering executive action as congressional leaders and White House officials struggle to reach a deal on the next coronavirus relief package. Trump, in an interview with Axios, defended his administration’s effort to beat back the U.S. outbreak that has shown little signs of easing.  “They are dying, that’s […]

President Donald Trump is considering executive action as congressional leaders and White House officials struggle to reach a deal on the next coronavirus relief package.

Trump, in an interview with Axios, defended his administration’s effort to beat back the U.S. outbreak that has shown little signs of easing.

“They are dying, that’s true,” Trump said. “It is what it is. But that doesn’t mean we aren’t doing everything we can.”

As more schools across the country welcome students back to class this week, some are already temporarily reclosing because of COVID-19 concerns. In Indiana, one school is shutting down two days after an employee tested positive for the virus. In another Indiana school, a student tested positive after the first day back to school.

The United Nations estimates more than 1 billion students worldwide have been affected by school closures. Secretary-General Antonio Guterres said the pandemic has created the largest disruption to education in history.

The coronavirus pandemic has created a new set of financial obstacles for young millennials and Gen Zers. Most are unsure how their generations can navigate through the worst global economic crisis since the 1930s. Almost 60% of young Americans say the pandemic has derailed their goal of becoming financially independent from family or other support, according to a new report by The Harris Poll on behalf of TD Ameritrade.

“Even before the economic downturn, young Americans generally had anxiety about their finances due to stagnant wages, the rising cost of living and debt burdens,” says Keith Denerstein, director of investment products and guidance at TD Ameritrade. “Now that’s been exacerbated by the pandemic.”

Some companies cashing out on crucial pandemic supplies

Taxpayers paid $2.4 million for ventilators and protective garb to a firm setting its sights on the global coronavirus pandemic. And the government appears to have grossly overpaid, a USA TODAY investigation suggests.

One deal involved paying about $17,000 apiece for 60 ventilators. One reseller says the units that were delivered wholesale for about $4,000 – and the government has cut deals for closer to $2,500 per unit. But trying to track down information about the company and its product exposes the tangled web the government has created for itself by relying on a growing number of middlemen, brokers and newcomers to secure emergency supplies.

The pandemic is under control in the U.S. and the administration has given governors “everything they need” to combat the outbreak, President Donald Trump said in an interview with Axios. He said some governors had failed to properly use federal assistance to curb outbreaks in their states. And he repeated his theme that the alarmingly high number of U.S. cases is a function of expansive testing.

“It’s under control as much as you can control it. This is a horrible plague,” Trump said. “I think you have to have a positive outlook, otherwise you would have nothing.”

COVID-19 has claimed lives of 13 nuns at Michigan convent

Thirty nuns – more than half of the nuns living together in their Michigan convent – have become infected with COVID-19. Of those, 13 have died, including one who recovered, but then relapsed, authorities say.

Since the 1930s, the sisters have started schools and hospitals in the Detroit suburb of Livonia. For generations, they have taught toddlers and held the hands of the terminally ill as they took their last breaths. Now the survivors are mostly isolated and quarantined in the convent and allowed few visitors.

“They are reluctant to say they need anything,” said Angela Moloney, president and CEO of the Catholic Foundation. “They are so self-sacrificing, they never think of themselves first. They’re always saying, ‘What can we provide the community?’ “

In New Jersey: 17 nuns from Sisters of Charity in Convent Station have died

The COVID-19 pandemic has led to the “largest disruption of education ever,” with more than 1 billion students affected by school closures in more than 160 countries, U.N. Secretary-General Antonio Guterres says.

Students with disabilities, those in minority or disadvantaged communities, displaced and refugee students, and those in remote areas are at highest risk of being left behind, he said. The world was facing a “learning crisis” before the pandemic, he added.

“We are at a defining moment for the world’s children and young people,” Guterres said.

Hawaii, Puerto Rico set records for deaths in a week

The Puerto Rico Health Department said it will investigate the crowds of people in shopping centers who are failing to follow safety and protection protocols.

Census Bureau to end all counting operations a month early

The Census Bureau plans to end all counting operations by Sept. 30, a month earlier than planned, the bureau’s director announced Monday. The bureau delayed its original date to complete the census from July 31 to Oct. 31 because of the coronavirus pandemic. The announcement comes after President Donald Trump signed a memorandum on July 21 asking the bureau to not count undocumented immigrants to decide how many members of Congress are apportioned to each state.

Hawaii continued to experience a sharp surge in the number of COVID-19 cases on Monday, prompting Gov. David Ige to warn that the state may once again delay the start of a pre-travel testing program for travelers.

“If there are too many cases here and we haven’t stopped the increase, then we would be looking at delaying the September 1st date,” Ige said, referring to the current timeline for allowing out-of state visitors to bypass a 14-day traveler quarantine if they test negative.

Hawaii reported a record 207 additional cases of the disease on Monday. State officials said more than half were the result of delayed reporting over the weekend due to issues at Hawaii’s clinical laboratories. Even so, the number comes after multiple recent days of triple-digit increases.

A California epidemiologist who was part of a World Health Organization team in the 1970s that helped eradicate smallpox predicts the world will be fighting the coronavirus for the next three to four years as virus hot spots skip from nation to nation and the pandemic’s toll will linger for decades.

But it’s “not all doom and gloom” with effective vaccines likely to emerge from dozens of candidates worldwide and effective treatments, including convalescent plasma and monoclonal antibodies, to help people recover more quickly, Dr. Larry Brilliant said.

“We will still be chasing the virus four years from now. But it won’t be like (today),” Brilliant told the USA TODAY Editorial Board on Monday afternoon. “It will be like the smallpox eradication program. The polio eradication program. Having yellow fever in some countries and not in others.”

Florida’s encouraging coronavirus trends continued Monday, with the number of COVID-19 patients in the hospital dipping slightly, deaths well below last week’s records and the positive test rate remaining in the single digits. Florida health officials reported just 4,752 new coronavirus infections Monday, a dramatic decrease when compared with the daily average for new infections last week, which was 9,327. That brought the statewide total to 491,884 cases.

The impact of testing sites closed due to a tropical storm were not immediately clear. While the number of new infections may be artificially suppressed by the lack of testing, the 73 new COVID-19 deaths reported Monday also is a big drop from the record highs recorded last week, when there were multiple days when deaths topped 200. Florida had 7,938 people in the hospital for COVID-19 Monday afternoon, down from 7,952 Sunday. There are nearly 1,000 fewer COVID-19 patients in the hospital right now compared to six days ago.

NFL players must make their decisions on whether to opt out of the 2020 season because of concerns over the coronavirus by 4 p.m. ET Thursday. The NFL owners and the NFL Players Association agreed to the terms Monday night, and the player body was notified of the arrangement shortly after, two people with knowledge of the situation told USA TODAY Sports.

They spoke on condition of anonymity because the league and union had yet to announce the pact. The agreement letter was finalized Monday night. Originally, the NFLPA and owners had agreed to set the opt out deadline for seven days after the finalization of the modified Collective Bargaining Agreement.

But with final details of the economic aspects of the deal still unresolved, and as more than 40 players have opted out already, NFL owners wanted to nail down the opt out deadline. Teams worried that players who were unlikely to make rosters would simply use the opt out clause to ensure themselves a stipend of $150,000 to $350,000 rather than making the move with the health and safety of themselves and their families in mind.

Tue Aug 4 , 2020
Our mission to help you navigate the new normal is fueled by subscribers. To enjoy unlimited access to our journalism, subscribe today. For some, the pandemic was a chance to open a new chapter. But for many businesses, the swift and stark economic shutdown led straight to Chapter 11. “We are […] 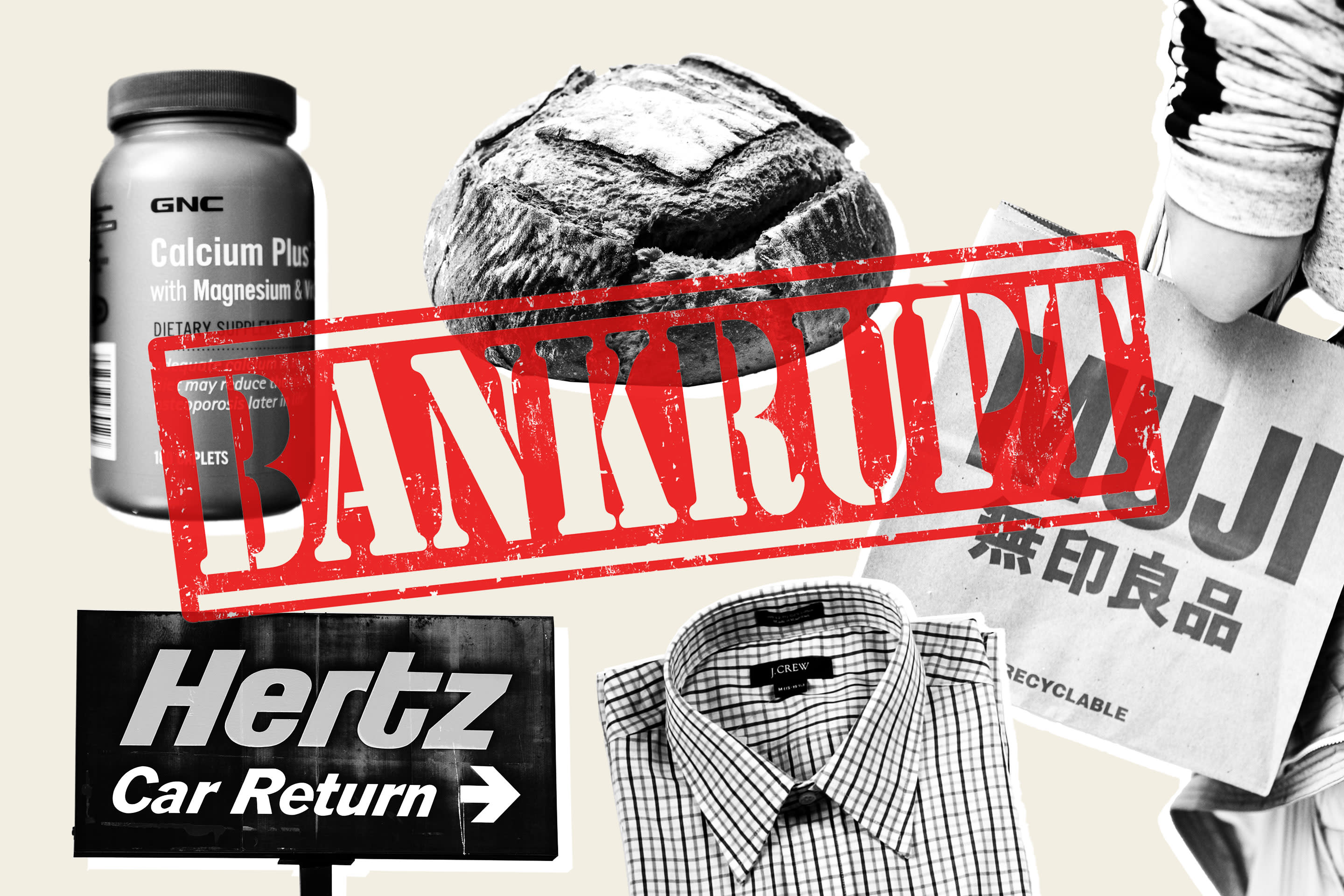