NASA astronauts Doug Hurley and Bob Behnken are the first humans SpaceX rocketed into orbit. SpaceX; NASA; Business Insider SpaceX’s Crew Dragon became the first crewed, commercially developed spaceship to dock at the International Space Station in May. This weekend, the ship and its astronauts — Bob Behnken and Doug […]

Despite the threat of Hurricane Isaias strafing coastal Florida with brutal weather, NASA and SpaceX are “go” to return the first commercial astronauts to planet Earth this weekend.

SpaceX made history in May when it became the first company to launch a crewed spaceship to the International Space Station. In doing so, Elon Musk’s rocket company also revived the United States’ ability to launch its own astronauts into space, which hadn’t been possible since the Space Shuttle program ended in 2011.

Two months later, the Demo-2 mission’s astronauts, Bob Behnken and Doug Hurley, are about to come home in the same spaceship, which they’ve named Endeavour. Their journey includes a fiery return through Earth’s atmosphere.

NASA will stream that flight, as well as the process in which the spaceship undocks from the space station, live this weekend — historic events you can watch below via NASA TV. Here’s the schedule:

You can watch NASA TV’s continuous coverage of the return flight below via the embedded YouTube player:

However, NASA and SpaceX may decide to delay the landing out of an abundance of caution.

It’s possible that Hurricane Isaias, whose powerful wind and rain are expected to batter Florida on Saturday, could foul weather at too many of the seven planned landing sites.

NASA said it plans to make the call for undocking (or not) around 1 p.m. ET. If the landing is delayed, Behnken and Hurley will try again roughly 24 hours later.

What to expect during the Crew Dragon’s return

The first phase of the astronauts’ return journey, undocking, calls for them to enter the Crew Dragon, after which the spaceship should retract the hooks that connect it to the ISS. Assuming all goes according to plan, it’s engines would then gently propel the ship away from the station. Once it’s flying free, the ship is programmed to fire its engines more aggressively to put it on the path toward its splashdown location off the Florida coast.

Then after it’s en route, the ship is expected to shed its trunk, which should burn up in the atmosphere. After the separation is complete, Crew Dragon should hurtle towards Earth at up to 17,500 miles per hour, or nearly 23 times the speed of sound.

During this fall, the spaceship’s heat shield will have to protect the hardware and crew from temperatures of up to 3,500 degrees Fahrenheit. Musk has called this part of the journey his “biggest concern.”

After the Crew Dragon reenters the thicker parts of Earth’s atmosphere, it is programmed to deploy two sets of parachutes. The first opens at 18,000 feet, then another set comes at 6,000 feet. After that is the splashdown: The capsule is expected to land in the ocean some 22 to 175 nautical miles off of Florida’s coast.

Right now, NASA is targeting a landing just off the coast of Panama City, Florida, in the Gulf of Mexico. At least one other of the seven total landing sites must be clear for Crew Dragon’s splash down too, though.

Sat Aug 1 , 2020
(Bloomberg) — Argentina’s creditors have approached several international organizations to seek endorsement for a proposal to change the rules that govern some of the country’s overseas securities, according to people familiar with the matter. The International Monetary Fund, the U.S. Treasury, the International Capital Market Association and the Institute of […] 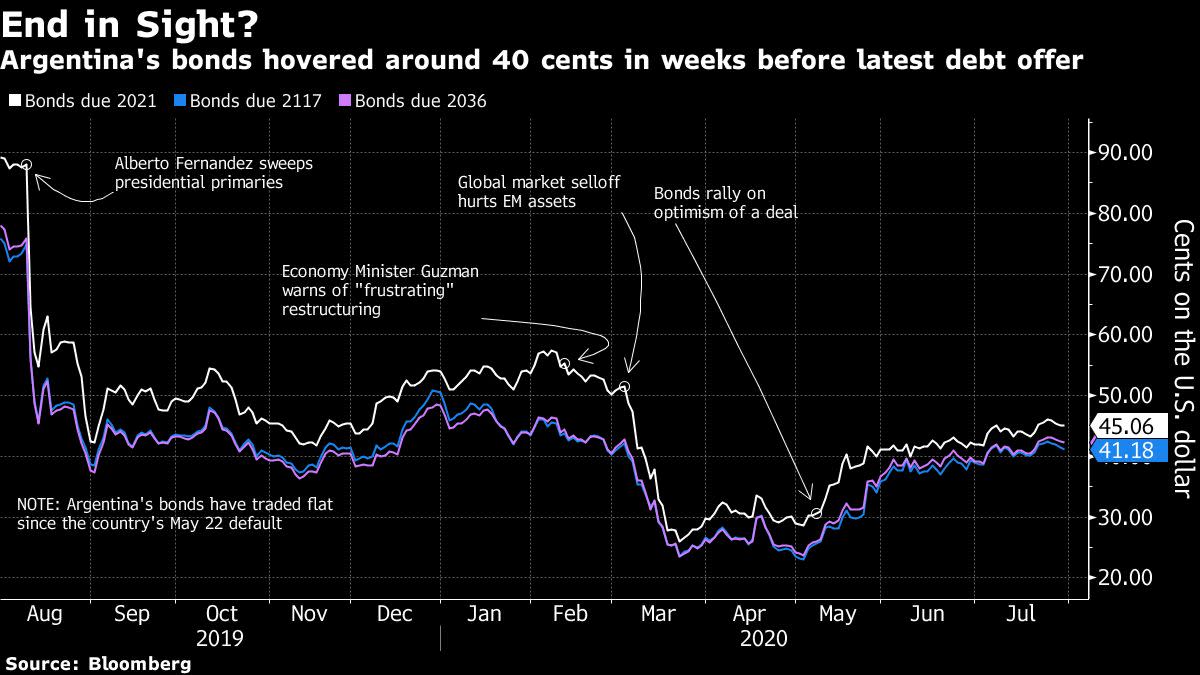