Happy Friday readers, Tom Grater here with your weekly rundown of news from around the world. This week, we’ve been on the ground at the Venice Film Festival learning about what it’s like to attend a major international fest in the COVID era, covering controversy around the Netflix movie Cuties, […]

Happy Friday readers, Tom Grater here with your weekly rundown of news from around the world. This week, we’ve been on the ground at the Venice Film Festival learning about what it’s like to attend a major international fest in the COVID era, covering controversy around the Netflix movie Cuties, and looking at Tenet‘s international roll out.

LIFE ON THE LIDO

Roll out the red carpet: Venice Film Festival got underway this week, marking the first major international film event to hold a physical edition in the pandemic era. From walls erected alongside red carpets to masks in venues, it’s a very different looking fest this year.

Boots on the ground: Deadline is bringing you all the news as it happens, with my colleagues Andreas Wiseman and Nancy Tartaglione reporting from Venice. Theaters were sparsely populated on day one, while on day two, bottlenecks caused by the new safety measures caused delays. But all in all, the protocols on the ground have not been overly arduous and things have gone relatively smoothly. You can read their day-by-day dispatches here.

Highlights: In Venice, Deadline has interviewed Regina King about her directorial debut One Night In Miami, and Luca Guadagnino about his new doc Salvatore: Shoemaker Of Dreams. Interesting nuggets from press conferences have included Cate Blanchett discussing some countries’ “obtuse” coronavirus response and Tilda Swinton evoking “Wakanda forever”. While talking points on the Lido include whether the studios should have helped the festival by sending more movies. You can also watch our video coverage, Deadline Now, here.

Death threats: When Netflix’s poster and description for its forthcoming release Cuties was released last week, no one had anticipated the vicious online backlash that would follow, with many people condemning the artwork for sexualizing children. Perhaps most shocked of all was the film’s French director Maïmouna Doucouré, who hadn’t seen the offending poster before it was released. The subsequent fallout was distressing for Doucouré, who in her first interview since the controversy unfolded told Deadline that she received death threats. You can read the interview in full here.

Mea culpa: Netflix moved quickly to remove the offending artwork, and unreservedly apologized. Doucouré also told us she received a personal apology in a phone call from Ted Sarandos, and that she isn’t holding a grudge. The film releases on the platform on September 9, and it will be interesting to see if the public response shifts once people have more widely seen the movie.

Banned: One place where the film likely won’t be seen is Turkey, with the country’s censorship board saying yesterday that it will instruct Netflix to block local access. Cuties follows a young Muslim girl and explores her cultural identity clashing with her liberal friends in France, themes that could be problematic for Turkey’s conservative Islamic regime. I hear that the board has not yet viewed the film, but history suggests Netflix will comply with the request.

New dawn: In this unprecedented pandemic era, no one really knew how viable it would be to roll out a major blockbuster into cinemas around the globe. Would audiences return to theaters in force or would they be put off by hygiene measures such as having to wear masks? Good news then, that Warner Bros’ Tenet surpassed all expectations, posting a $53M opening from 40 overseas markets and Canada. Read Nancy Tartaglione’s latest box office report.

Topping expectations: It was a tricky prediction to make but most analysts had the film starting in the $30-40M range, meaning this is an extremely positive moment for the beleaguered theatrical sector. “Given the unprecedented circumstances of this global release we know we’re running a marathon, not a sprint, and look forward to long playability for this film globally for many weeks to come,” said WB chairman Toby Emmerich in response to the news.

How high can it go? It will be fascinating to see what the ceiling is for Tenet, but the film has several major markets to come, including China on September 4 and the U.S., where the film began its release yesterday (September 3). The American market still has a way to go before it nears full capacity again, with New York and Los Angeles venues yet to open cinemas.

Going online: While Tenet lights up theaters, it is set to be a different story for Mulan, which Disney released directly online today after opting to bypass theaters in most territories. This week, my colleague Anthony D’Alessandro interviewed producer Jason Reed to get his take on the controversial move. You can read that here.

An experiment: “I don’t think that anything that is happening during the pandemic is setting a precedent for what has to happen in the future,” Reed told us, though he said he hadn’t been a part of Disney’s decision. The producer acknowledged that the move is an experiment for the studio, which is betting big on the PVOD model by bypassing the potentially lucrative theatrical circuit (even if the pandemic has changed the picture). The contrasting fortunes of Tenet and Mulan could have a lasting impact on the film business.

China release green light: One territory where audiences will be able to see Mulan on the big screen is China, which this week confirmed the film will release on September 11.

BEST OF THE REST

Canned: Amazon has scrapped plans to get production back up and running on Cortés y Moctezuma, an epic four-hour miniseries starring Javier Bardem, citing financial issues related to the pandemic. The project had previously been disrupted when allegations of sexual misconduct were made against its co-director, Ciro Guerra. Nellie Andreeva had the exclusive.

Future-proofing: Tim Davie, the new Director General of the BBC, gave his first speech in the role this week, outlining plans for the organization. Saying there was “no room for complacency”, he announced that the broadcaster will cut 900 jobs as it looks to reduce overheads. Read Peter White’s coverage here.

TIFF sales titles roll in: Joel Edgerton, Marion Cotillard, Mark Rylance, Sebastian Stan and Vanessa Kirby are among the all-star cast set for Brady Corbet’s immigrant drama The Brutalist, which will chronicle 30 years in the life of visionary architect László Toth. Elsewhere, Daisy Ridley, Kristin Scott Thomas and Nina Hoss will lead the cast of Women In The Castle, Jane Anderson’s adaptation of Jessica Shattuck’s 2017 New York Times bestseller. Pic is about three widows of conspirators involved in an assassination attempt on Hitler.

Eco footprint: The pandemic may dominate headlines right now, but the film industry is still trying to tackle its impact on the environment. A new report this week published by UK orgs the BFI and BAFTA explores how the biz could reduce emissions to zero by 2050.

Fri Sep 4 , 2020
Mortgage rates are staying close to their all-time lows this week, a popular survey shows, and that’s a blessing for homebuyers who are dealing with overheated prices during what has become a sizzling summer for home sales. The usual peak spring buying season is underway very late this year because […] 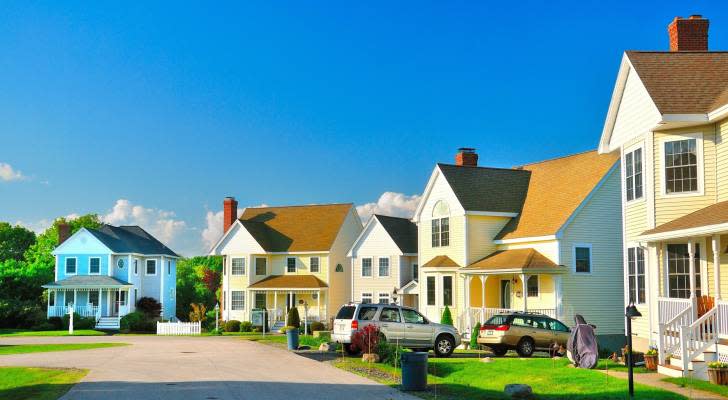