Photograph: Justin Lane/EPA The coronavirus pandemic has wrought destruction on US workers at a scale and speed that is almost unfathomable.  It was only in February that Donald Trump was touting an unemployment level of 3.5%, a 50-year low. The unemployment rate dropped on Friday to 13.3% – but is […]

The coronavirus pandemic has wrought destruction on US workers at a scale and speed that is almost unfathomable.

It was only in February that Donald Trump was touting an unemployment level of 3.5%, a 50-year low. The unemployment rate dropped on Friday to 13.3% – but is still at its highest level since the 1980s – and many economists fear the real figure is far higher.

In just four months 42 million people have filed for unemployment insurance, more people than the population of Canada.

Such huge numbers can numb reality – a reality that will cause suffering and hardship for millions of people for years to come. Trump claimed victory after the latest jobs report and Republicans are pressing for lockdowns to be eased further, threatening a further spike in coronavirus cases. A new round of stimulus cash for struggling people and businesses now looks more unlikely.

Over the last few months the Guardian has interviewed Americans who have lost their jobs all across the country. Here we return to some of them to see how they are faring as the US is, nominally, getting back to “normal”. For many of them “normal” seems a long way off.

‘We don’t make any money now’

As the US opens up for business again, Aya Rabbaa, 19, should be one of the success stories. She lost her part-time job at an iHop restaurant in Madison, Wisconsin, in March and waited eight weeks to receive her unemployment check.

The restaurant is open after Wisconsin’s supreme court struck down the state’s stay-at-home order, against the wishes of its Democratic governor, Tony Evers.

Rabbaa, a college student, relies on her wages to pay her expenses, but the coronavirus pandemic has taken a heavy toll. “We don’t make any money now,” she says. Despite the court ruling, customers are scared and the tips she relies on have dried up.

‘The inequality and injustice need to stop’

Latasha Johnson has been waiting more than two months to get her first unemployment insurance check, but in the past week, her top concern is about what that workplace will look like when she does return.

Johnson, 41, has been reflecting on racism she has experienced and witnessed at work amid the protests over the police killing of George Floyd. “Not only does the inequality and injustice need to stop in the police systems, but it also needs to stop within our job sites as well,” she said.

In mid-March, Johnson was laid off from her job in dining services at the University of Illinois, where she described what she sees as a pattern of racial discrimination at work. One black supervisor was repeatedly passed over for managerial roles, she said, before a young white student with no experience in food service was promoted above him.

A white co-worker repeatedly referred to an older black colleague from the south as “boy”. She said the white worker was forced to take anti-discrimination classes and moved to a different unit, where they still worked with predominantly black people.

Meanwhile, she waits for her unemployment insurance claim to be processed – a problem affecting millions of Americans – and has had to borrow money to survive.

“All of this stuff, it’s a huge stress,” Johnson says. “It takes a turn on you, not just as an American and a woman, but a black woman in America.”

Taylor Cox, 29, has seen the crisis as a call to action. Cox was laid off from an Indiana casino in March, and has used his new free time to fully dedicate himself to union work.

Two months later he is still out of work but “busier now than I was when I was working my job at the casino”, Cox, a member of Unite Here, says.

Roughly 95% of Unite Here’s 300,000 members are out of work from industries hardest-hit by lockdowns, such as gaming and food service.

Five to six days a week, Cox fields calls from people trying to figure out why they haven’t received unemployment insurance nine weeks after they applied, or want to know what their rights are as businesses reopen.

He is worried about what happens when the federal government’s unemployment expansion of $600 a week ends in July. “I’m squeaking by right now with the state unemployment plus the $600 per week, but if it goes down to just the state amount, I don’t know how I am going to be able to do it,” Cox said.

But he said it is easy to stay motivated now that people see how their employers treat them amid a pandemic and economic crisis.

“People are starting to realize that it’s greed, and that organizing and fighting for what is right is in all of our best interests and it’s not going to go away,” Cox says. “The second we stop fighting is the second they start pushing back.”

Andrea Grabow, a server at Sheraton hotel in Waikiki for 24 years, has been out of work since 1 March. Hawaii’s tourism industry remains shut down, and the state is experiencing the highest unemployment rate in the US.

After weeks of waiting, Grabow has started receiving unemployment benefits, but like many Americans hit by the jobs crisis, her family has had to rely on food banks. Her partner works 14-hour days at a minimum-wage essential job trying to collect overtime pay. Grabow hasn’t received any information on when or if she will be recalled to work.

‘I didn’t think it was worth trying’

Jessica Hockaday, an Instacart shopper for over a year in Raleigh, North Carolina, has been out of work since the pandemic began due to her heart condition, cardiomyopathy, placing her at high risk for Covid-19. Like many unemployed Americans she does not show up in the official figures.

In early April, Hockaday explained to the Guardian that she hadn’t received any sort of paid sick leave from Instacart because she hadn’t contracted coronavirus, and hadn’t bothered trying to apply for unemployment benefits because she wasn’t eligible due to her status as an independent contractor for Instacart.

Over two months into the coronavirus pandemic, Hockaday still remains unemployed, without any income, unemployment benefits, or paid sick time.

“My husband is out on leave from work, but we have two-thirds of his pay keeping us afloat,” says Hockaday. “I didn’t apply for unemployment because of how backed up it is in North Carolina. People have applied in March and still haven’t received them so I didn’t think it was worth trying.”

‘When you don’t have anything, that adds up’

It took Brenda Waybrant of Nashville, Tennessee, nearly two months to have her unemployment application approved and for payments to come in, now she is worried about her healthcare.

“Fifty dollars a week doesn’t sound like much when you’re making money, but when you don’t have anything, that adds up a lot,” she said.

Her employer said workers will probably not come back to work until October. At present she is receiving an extra $600 a week under the federal government’s bailout package but that is set to expire unless Congress can reach a deal soon. Waybrant is worried about whether it will even be possible to live off Tennessee’s maximum weekly unemployment payout of $275.

“I’m just going to sit and wait and see,” Waybrant said of her future plans. “A lot of my answer depends on what healthcare [I get] from my job.”

‘They need to do something about this system’

Ivette Cruz of Kissimmee, Florida felt a wave of relief when three weeks of unemployment insurance came in the middle of May after she was laid off from her two jobs at a food service company and at the retailer JC Penney, which has since gone bankrupt. For weeks, she spent hours simply trying to get her application into the system – a struggle many Floridians experienced when dealing with an overwhelmed, antiquated online system.

But since the first payments came in mid-May, Cruz says, no others have arrived. To restart those payments Cruz needs to log into the online system and confirm that she is willing and able to work, but the online system is still faulty. Whenever she tries to log in, it keeps booting her out.

“There was relief for a couple of weeks, but now we’re back to square one. A little bit different, but it’s almost the same,” Cruz says.

Whenever she tries to call the state for help trying to get through the system, the operators do not know how to help her.

In a poll of more than 4,500 unemployed workers conducted by Unite Here, a union that represents hospitality workers, in Florida, only 16% of respondents said they had received their payment. Most have had some of their payments, like Ivette, while 30% have received no payments at all.

Cruz is worried about how she will be able to pay her bills, especially her mortgage payments which are already three weeks behind. “It’s not only me. There are a lot more people out there that are suffering and struggling,” Cruz said. “They need to do something about this system.”

Yolanda Murray, who was laid off her from her job as lead steward at a Westin Hotel in Detroit, Michigan, has been getting her unemployment insurance steadily since April after a fight to get through the unemployment system.

Next month, Murray will have to apply again to extend her insurance. “I’m just praying I don’t have a difficult time sending it,” Murray says.

While her hotel has not mentioned a specific date they could reopen, Marriott, the hotel’s parent company, has indicated to employees that its hotel will probably not reopen until October.

Sun Jun 14 , 2020
Click here to read the full article. G-III Apparel Group held a virtual annual meeting on Thursday to update shareholders on its performance and on how it will be reopening its corporate offices on Monday in a responsible manner, with the health of employees and customers as top priorities. “We […] 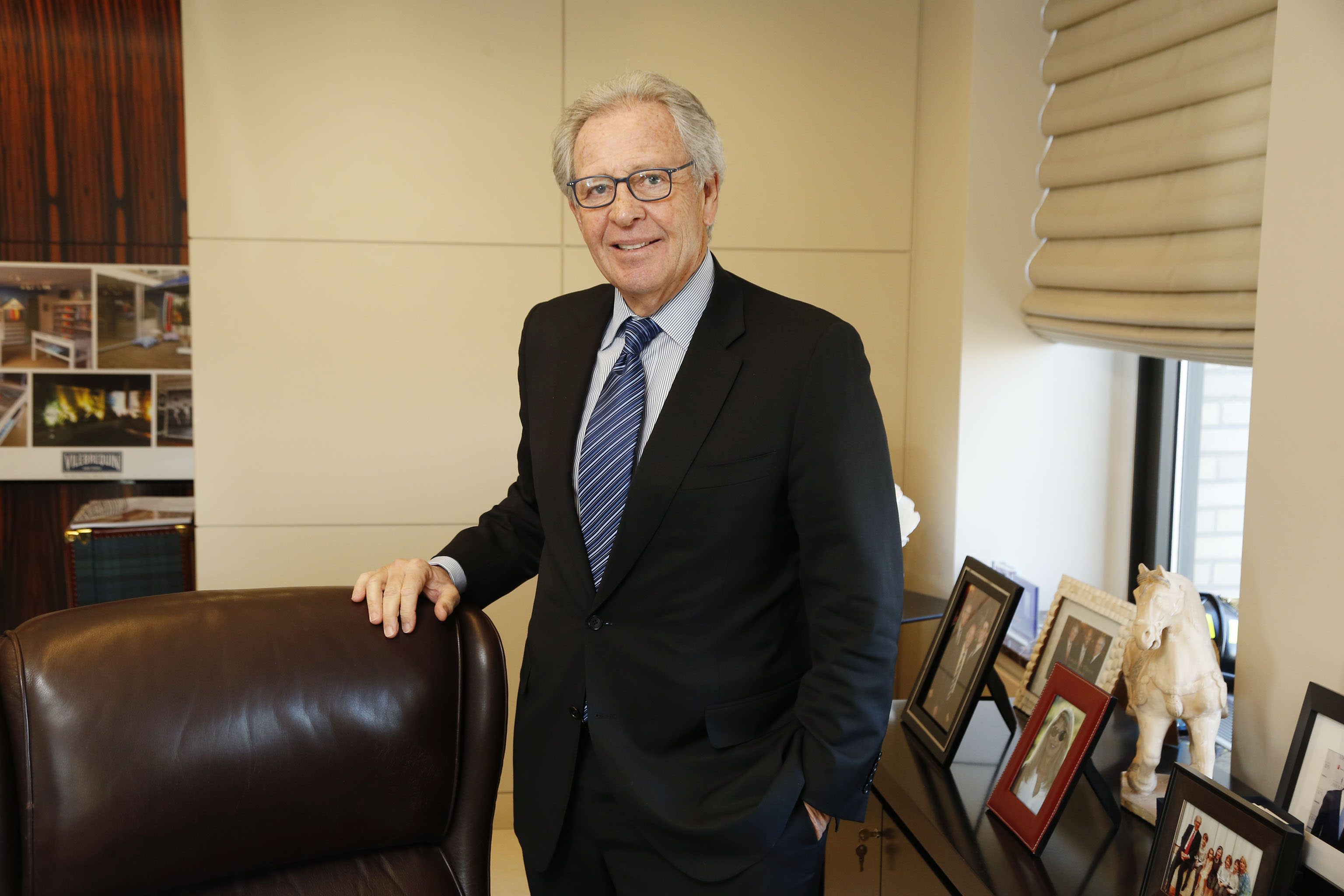