AS new figures reveal almost 50% of women have experienced online abuse since the start of the coronavirus pandemic, Fabulous investigates the worrying rise of gossip platforms. Rebecca Fisher stared at the screen in front of her and felt sick. “She’s the fattest, ugliest council estate blogger on Instagram,” she […]

AS new figures reveal almost 50% of women have experienced online abuse since the start of the coronavirus pandemic, Fabulous investigates the worrying rise of gossip platforms.

Rebecca Fisher stared at the screen in front of her and felt sick. “She’s the fattest, ugliest council estate blogger on Instagram,” she read.

“Her children are dirty and scruffy – they can’t be properly looked after,” said another comment on the internet forum, while a third declared of Rebecca’s husband Jonny: “He looks like a drug addict and criminal.”

“Each word was like a punch to the gut,” remembers blogger Rebecca, 25, a mum of three from Norfolk. “To be confronted with such personal abuse really knocked me. It was incredibly hurtful that complete strangers felt so vitriolic towards me.”

Rebecca, whose online profile is The Coastal Mummy, has been blogging about family life since 2016 – and now has a solid though relatively modest 14.9K followers on her accompanying Instagram account.

In March 2019, she was tipped off by a fellow blogger that she was a topic of a discussion on Tattle Life, one of a number of so-called “trashing” websites, where users debate everyone from celebs to social media stars and lesser-known bloggers.

The existence of these gossip platforms, combined with the fact we are now spending a record four hours a day online according to a recent Ofcom report, has created the perfect storm for trolls.

In September, a survey by the organisation End Violence Against Women found almost 50% of women have experienced online abuse during the pandemic.

Dr Linda Kaye is a cyber-psychology researcher at Edge Hill University in Lancashire, and suggests divisions within the country since the coronavirus outbreak and subsequent restrictions have impacted online behaviour.

“We’ve become very polarised, and the idea of us all being in it together has really frayed during the pandemic. People are finding all sorts of ways to criticise, call each other out and attribute blame,” she explains.

“Often trolls do this to feel better about their own lives – or just to garner attention or elicit a reaction from others.”
One recent victim is Liverpool-based make-up artist Katie Hayes, 28. Last month, she resorted to posting an Instagram video begging users of sites like Tattle Life to stop harassing her.

She alleged they even fabricated reports of her breaking lockdown rules, which led to police coming to her home. In the video, Katie said: “I don’t know how much more I can take of this… These trolls want me to have a mental breakdown.”

Claiming users were determined to wreck her career – she has an Instagram following of 173K and YouTube channel boasting more than 55,000 subscribers – she recorded a powerful Instagram video saying: “They discussed my children, criticised my parenting, mocked my marriage and made personal insults about my husband.”

LAST month, Sali made a documentary about her experience for Radio 4, and as part of it met with one of her trolls, a woman called Becky* who acknowledged issues in her own life had influenced her online behaviour.

“For me specifically, I can say 100% what was going on in my own life is reflected in what I posted… It was nothing really to do with the content creator,” she told Sali.

Tattle Life – which says on its site that it allows “critiques of people that choose to monetise their personal life as a business” – launched in the summer of 2018, and since then has attracted tens of thousands of registered users around the world.

But for many of us, the first time we’d heard of the platform was late last year when leading mummy blogger Clemmie Hooper was outed as a Tattle troll and admitted targeting rivals on the site.

The majority of Tattle Life’s users seem to be women, as do the celebrities, influencers and bloggers who are discussed on the site.

There is no formal regulation of the platform, with its guidelines simply stating: “No moderating. If there’s a post you don’t like either keep scrolling, add the user to your ignore list or report. Don’t attempt to shut down the conversation.”

But Tattle Life is just one platform enabling public bitch-fests, and other forums such as US-based Guru Gossip and Get Off My Internets are rife with victim-trashing, too.

This means little is off-limits, says internet lawyer Yair Cohen. He explains that because many gossip sites originated in America, US law grants them almost total immunity from regulation.

The country’s laws on free speech mean even the most offensive views, such as Holocaust denial, are allowed to be aired there.

“So even if a comment is defamatory, the owners of the website are not obliged to take it down,” says Yair. “If the owners do refuse to remove a post, the only legal recourse is to attempt to formally identify a troll and take them to court.”

Posting about simple family life in a Norfolk seaside village, Rebecca never imagined she’d attract the attention of internet trolls. She first began blogging in September 2016 to raise awareness of Down’s syndrome, which her brother Rory, now five, was born with.

But when she read the Tattle thread about herself last March, even this aspect of her life had been slated. “They questioned why I cared so much about Rory, saying it was weird. But he’s my little brother – of course I’ll fight for him,” she says.

After the traumatic birth of her second daughter by C-section in July 2017, Rebecca was diagnosed with PTSD – and she blogged about her struggles at the time.

“The Tattle users picked up on that, too, accusing me of faking it. They repeatedly called me a liar, saying I was too common for our village, and that I actually lived on a rough estate,” she says.

Married to carpet-fitter Jonny, 28, since December 2015, Rebecca says she was most hurt by seeing her children – Elsa, five, Cleo, three, and one-year-old Brody – picked apart. “People say if you put your life on the internet you should expect criticism, but dissing kids is not criticism, it’s abuse.”

She believes her children were targeted because of her collaborations with family brands on her social platforms. “It must be jealousy, because we’re sent toys to review, which the kids love. We’ve also had great trips to places like Peppa Pig World, and the trolls hate it.”

“I wanted to delete everything I’d ever done. I doubted myself as a mother, and for weeks I didn’t want to leave the house. Jonny was a great support, though – he told me to ignore it and not give in.”

In June 2019, she posted an open letter about her experiences on her blog called Dear Tattle Life, explaining how low the abuse had made her feel. “It generated support from followers and other bloggers, and after that the worst of the abuse was suddenly removed from the site,” she says.

“I’m a strong person and have put it behind me, but if a vulnerable woman was attacked in this way, the consequences could be more serious, even fatal.”

Lifestyle blogger Sarah* agrees. After experiencing sinister trolling, she’s feared for her life on several occasions since launching her online career in 2013.

She asked to detail her experiences anonymously for fear of reprisals over speaking out, as her trolls have even gone as far as finding out where she lives, as well as urging her to end her own life.

Sarah first came across online abuse about her on the Guru Gossip trashing site in late 2014. “I was called fat and ugly, but it was the moral shaming that really affected me,” she says. “I was accused of being a liar and a fake, of not disclosing endorsements in my social posts.

“The trolls reported me to the ASA (Advertising Standards Agency), even though I state when a post is an ad. They’re jealous of anyone making money or being successful.”

Things got worse after Sarah saw Sali Hughes’ Instagram video last year. “I’d never heard of Tattle Life before, but then I went on to the site and spent five hours reading hundreds of comments about myself,” she says.

“They slated every inch of my life – from my house and car to my hair and family. One person said I should kill myself, and another said they wished my grandparents would drop dead. I just sat there shaking.”

Disturbingly, when Sarah put her house up for sale, her trolls were intent on locating it. “They identified a window from a YouTube video I’d made, and then used Rightmove to find my house.

“They even found out where I planned to buy, and I was so scared I pulled out of the sale. It genuinely left me afraid for my life.” While she has considered reporting trolls to the police several times, fear of inflaming the situation stops her. “I’m petrified it would make it worse,” she says. “My attitude is to ignore them, because the more you react, the more abusive they get.”

Even lawyer Yair agrees, saying: “The police don’t take it seriously. They should, because it is criminal harassment, and when attacked in this way, victims feel vulnerable.

“If victims wish to pursue a legal case, lawyers can obtain disclosure orders from the website operators, requiring them to hand over information about the culprits. We then contact them and if they don’t accept responsibility, we can take them to court and sue them for defamation or harassment.”

Although Fabulous contacted both Tattle Life and Guru Gossip for their comments, we received no response from either. Guidance on Tattle’s site says that users should report offensive content, stating: “Thousands of messages are posted every day and staff can’t read them all.”

Meanwhile, Guru Gossip insists users must not post any content that is “abusive, obscene, vulgar, slanderous, hateful, threatening, [or] sexually-orientated,” and that failure to comply could lead to users being banned.

Reddit told us that it relies on stringent self-regulation by community moderators to weed out abuse. Dr Linda Kaye says that while platforms like Tattle Life must change, users like Sali’s troll Becky have to take responsibility for their actions, too.

“The platforms and software developers have a vital role to play in having better internal moderation,” she says. “Sites like Instagram are working on anti-bullying technology, using ‘nudges’ to ask users if they really want to post hurtful comments.

Waffle House is launching a beer that tastes like BACON

Meghan and Harry may lose royal titles in Megxit review

The Crown could be extended to show Harry & Wills as adults, expert claims

But the fact that people can hide behind a name that is not identifiable means that they feel less accountable.” Victims of trolling, including Rebecca, couldn’t agree more with this.

“The sites need to be more accountable, but it’s the trolls who need to recognise that their actions not only cause huge emotional distress, but devastate entire lives.”

Sun Nov 29 , 2020
SOUTH BEND, Ind. (WNDU) -Small businesses across Michiana are working hard on their busiest day of the year–Small Business Saturday. 16 News Now caught up with some business owners in South Bend to tell us why this year’s Small Business Saturday is more important than ever. The coronavirus pandemic isn’t […] 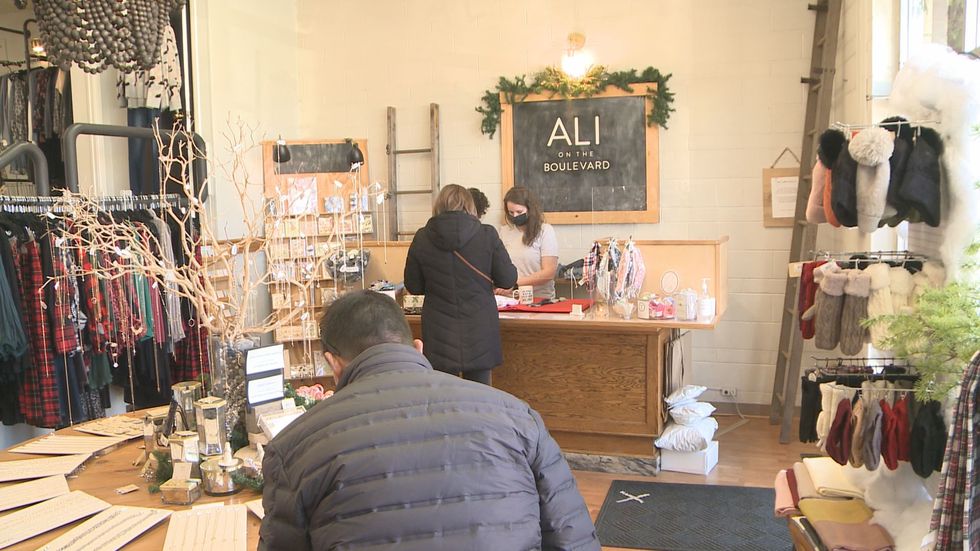