Credit: Parler A right-wing exodus from Twitter and Facebook following accusations of conservative censorship spiked a surge in downloads and new user accounts on Parler, which has branded itself “the free speech social network”. Far-right figures banned from other platforms have found a new home on the app, where right-leaning […]

A right-wing exodus from Twitter and Facebook following accusations of conservative censorship spiked a surge in downloads and new user accounts on Parler, which has branded itself “the free speech social network”.

Far-right figures banned from other platforms have found a new home on the app, where right-leaning or far-right users ridicule so-called “autonomous zones” and “safe spaces” while simultaneously revelling in their own.

Founded in 2018, Parler — describing itself as “unbiased social media focused on real user experiences and engagement” that allows “free expression without violence and no censorship” — has become an echo chamber of support for Donald Trump, whose campaign dominates a platform where conservative media personalities and outlets amplify his agenda.

The president is not on the app (yet), but his son Eric Trump and White House press secretary Kayleigh McEnany are, along with his Republican allies like Devin Nunes, Jim Jordan, Matt Gaetz and sycophantic pundits and their outlets.

Team Trump is often quick to comment with a generated message welcoming the user to Parler with a call to “help us MAKE AMERICA GREAT AGAIN” by subscribing to the campaign’s website and texting TRUMP for campaign updates sent to one’s mobile.

In her posts, Ms McEnany shared a still from the film Braveheart, writing “FREEDOM!!! I’m DONE with censorship”, and railed against Barack Obama and Joe Biden over the “absolutely despicable treatment” of the president’s former national security adviser Michael Flynn, as well as Silicon Valley, “the Swamp,” and the “radical left & Antifa (one in the same)” – all of which are “against us.”

“But we WILL prevail as President Trump leads us to law and order, peace and prosperity!” she said.

She follows 15 accounts, including Trump campaign staff, GOP allies and conservative commentator Dan Bongino, who has committed to “owning the libs”. He has nearly 1 million followers on the platform.

The only other government accounts on the site belong to Nasa.

With a #Twexit surge in new users on the platform, created by software developers John Matze and Jared Thompson, the app had roughly 1.5 million daily active users by late last month.

After downloading and opening the app, users are asked to pick their favourite colour from seven circles.

Parler asks for an email address, phone number and a strong password, the latter apparently a roadblock for several users who complained about the requirement in Apple’s app store, followed by a captcha puzzle and a six-digit code sent to the user’s mobile phone.

Users are welcomed by a “Parler concierge” who comments on that post: “Welcome to Parler. Hope you enjoy your new found freedom. Have fun, interact and enjoy.”

The president’s campaign and other authorised personalities have generated similar welcome messages, including from Ron Paul, the former libertarian Republican congressman and presidential candidate.

“I’ve spent my adult life fighting for Liberty, and I am excited about this new space where I can openly share my work with special people like you,” his account wrote. “Parler accepts your right to express your thoughts.”

Users can upvote or “echo” other posts, similar to retweeting, and comment below them, similar to the expanded posts under tweets or on Facebook.

Much of the discourse on the platform echoes that already on the Trump-supporting online right and its lens of an ideological binary – those who support Trump, and an amorphous and broadly defined “left” that includes Nancy Pelosi and Bill Gates as well as “antifa” and Black Lives Matter demonstrators.

Social media companies have scrambled in recent weeks to address hate speech and misinformation that have spread across their platforms.

In recent months, the president and his campaign accelerated their rhetoric against social media platforms, as his Twitter account breached the company’s policy against posts that incite violence after he shared “when the looting starts, the shooting starts.

During a Students for Trump event in Arizona last month, the president railed against alleged “fake news” social media censorship, telling young right-wing Americans “you will not be silenced”.

In May, the president issued an executive order “preventing online censorship”, and accused social media platforms of invoking “inconsistent, irrational, and groundless justification” to “censor” or “restrict Americans’ speech” while his administration was simultaneously targeting political opponents on the opposite end of the political spectrum.

In June, Twitter labelled copyrighted material in a meme that appeared on the president’s Twitter feed as “manipulated media” while the meme’s creator Logan Cook, aka Carpe Donktum, was permanently suspended from the platform.

Carpe Donktum found a home on Parler instead.

Like Gab, which emerged as a platform for antisemitism and other hate speech, several other famously banned far-right figures have accounts on Parler, including Milo Yiannopoulos, Proud Boys creator Gavin McInnes, and anti-Muslim far-right conspiracy theorist Laura Loomer, who has been banned from several platforms as well as PayPal and GoFundMe and is using her Parler to promote her Florida congressional campaign.

Candace Owens — who once claimed that “if Hitler just wanted to make Germany great and have things run well, OK, fine” — also has a home on the platform.

After her permanent ban from Twitter, Katie Hopkins has found an audience on Parler, where she has criticised Premier League players for supporting Black Lives Matter and blamed Muslims for a spike in coronavirus.

Zero Hedge, a right-wing finance and conspiracy blog that was briefly suspended from Facebook and Twitter, is among several frequent sources in Parler’s news tab, which functions similarly to the trending tab on Twitter, and where users can find links to the Bongino Report, Washington Examiner, Newstarget, The Federalist, The Daily Caller and Epoch Times, among others.

A recent Zero Hedge headline on the platform (“Media-Induced fear of Covid-19 is starting to cause a second wave of severe economic panic”) came as health officials and news outlets projected a worsening public health crisis following an aggressive surge in coronavirus cases and hospitalisations. But on Parler, users demand businesses and states reopen, loathe Dr Anthony Fauci, refute the nation’s death toll and suggest that scientists and researchers are lying about the data.

These views aren’t exclusive to Parler. They can be found across social media, from the president’s Twitter feed to countless other accounts, forums and other online groups, where they’re more likely to be ridiculed or drawn into debate. Prominent right-wing commentators still have significant audiences on Facebook and Twitter and share similar or identical posts to Parler.

But the right’s retreat to yet another platform where users are ostensibly more comfortable espousing their views – without being held accountable for their own bigotry – weighs against their own calls to protect the sanctity of the First Amendment and free speech, becoming fertile ground for confirmation bias.

Much like how Twitter allowed the president to directly address his supporters without the gatekeeping of fact-checking and context or analysis, appealing emotionally or violently to his supporters, Parler has thus far assured users will be met approvingly by the similarly aligned.

That hasn’t stopped an army of anti-Trump trolls from joining the platform and easily “tag bombing” other users by posting inflammatory Parleys with pro-Trump hashtags. Anti-Trump users also are free to jump into other users’ comment sections that – under the platform’s community guidelines – they can’t do much to prevent.

It also has rules against defamation (“Do not purposefully share rumours about other users/people you know are false”) and violence. People are told not to use language or visuals threatening harm or that “may symbolically mean someone should be attacked or killed”.

“Use your words to express your opinions without the use of violence,” the guidelines state.

Despite its selling point as a sanctuary for free speech, Parler experiences the same kinds of content moderation issues that have bugged other platforms, and its own user policies and statements from its CEO contradict the “free expression” it advertises.

In a post on Parler, he later added: “If ever in doubt, ask yourself if you would say it on the streets of New York or national television.”

“We will not allow you to spam other people trying to speak, with unrelated comments like ‘F*** you’ in every comment. It’s stupid. It’s pointless. Grow up,” he said.

Pornographic material also is prohibited, he said: “Doesn’t matter who, what, where, when or in what realm.”

Guidelines on the platform said the company’s aim is to “uphold the rights of free speech according to the US Constitution”.

But it doesn’t want its content to be so “obscene that it undermines the core purpose of Parler as a platform for meaningful discussion”.

Facebook bans US extremist groups after profiting from their adverts

Facebook to label inflammatory posts from Trump and other politicians

Just 8% of colleges are keeping classes online this fall, but more may join them as coronavirus outbreaks surge. Here's the list so far.

Thu Jul 2 , 2020
A graduate gets ready to pose for a picture at the empty campus of San Diego State University, after the California State University system announced the fall 2020 semester will be online, May 13, 2020. Mike Blake/Reuters After a semester of remote courses and online graduations, some colleges and universities […] 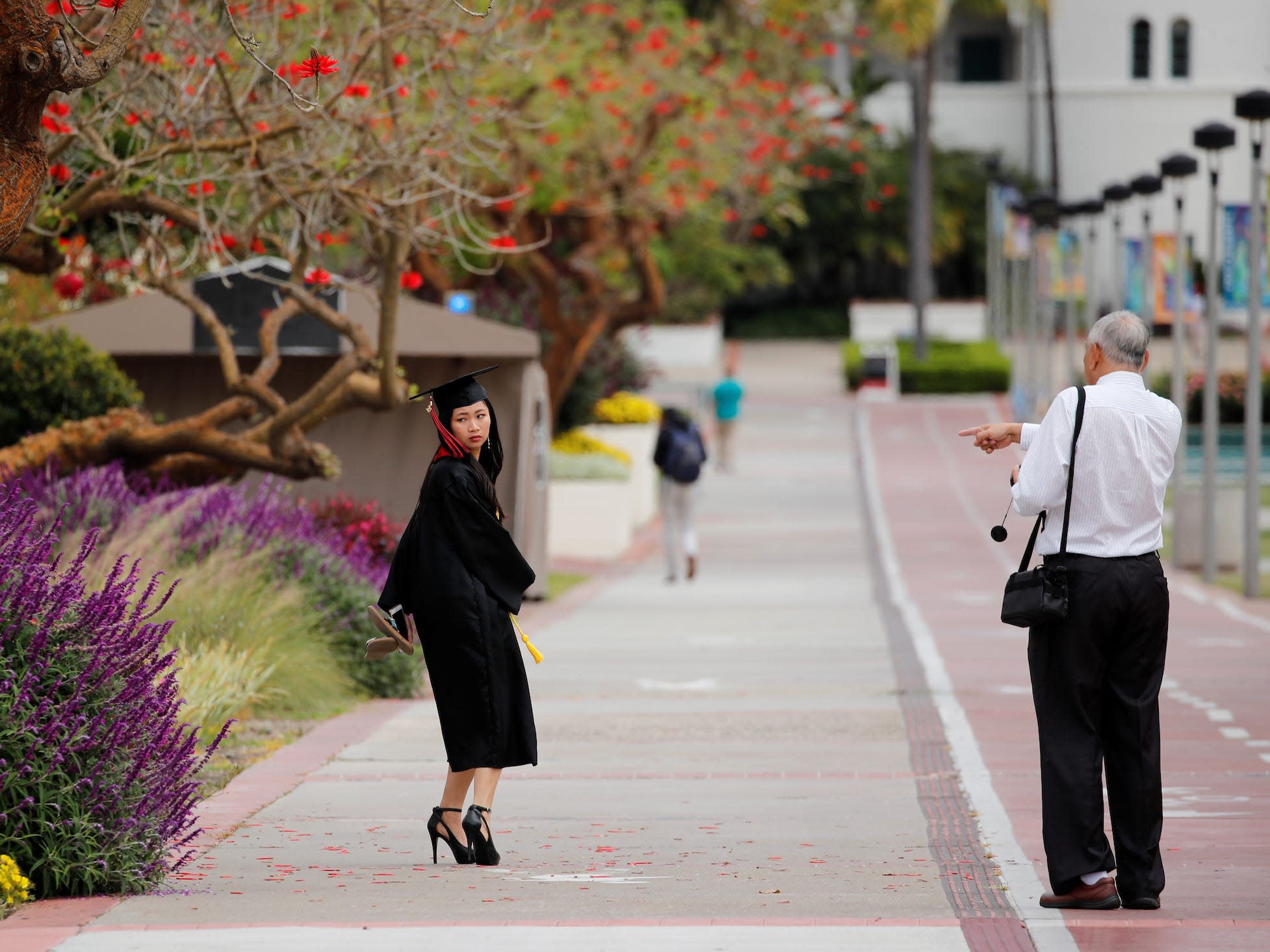