While the rise of the #MeToo movement has encouraged more people to talk openly about sexual misconduct in recent years, cases of sexual harassment at work have remained “alarmingly high” according to The Trades Union Congress (TUC).

Although both men and women can suffer of sexual assault, its links to power structures means that women are more commonly the victims. Research by the TUC found that more than half (52 per cent) of women – and nearly two-thirds (63 per cent) of young women aged 18-24 years old – have experienced sexual harassment at work.

The prominence of sexual assault in the workplace was further highlighted by a recent inquiry into the culture at the GMB union, one of the largest trade unions in the UK. The independent investigation by barrister Karon Monaghan QC found that “bullying, misogyny, cronyism and sexual harassment are endemic” at the union.

A new study by The BMJ also found that employees who suffer sexual harassment at work have a higher risk of death by suicide. It states that sexual harassment in the workplace needs to be deemed a substantial public health issue and an “occupational hazard”.

While sexual harassment at work is all to common, experiencing it can make an employee feel isolated, humiliated and unsure where to turn for support, and addressing a case of sexual harassment with your employer can feel incredibly daunting.

The Independent has spoken to experts on what to do if you don’t want to approach your employer, with resources to help.

What is sexual harassment?

Citizens Advice defines sexual harassment as “unwanted behaviour of a sexual nature that violates your dignity, makes you feel intimidated, degraded or humiliated and creates a hostile or offensive environment.”

Sexual assault can be a one-off incident or an ongoing pattern of behaviour and can include flirting, gesturing or making sexual remarks about someone’s body, clothing or appearance, asking questions about someone’s sex life, telling sexually offensive jokes, emailing, texting or messaging sexual content, touching someone against their will, and sexual assault or rape.

John Palmer, a senior advisor at the Advisory, Conciliation and Arbitration Service (Acas), explains that “the person contributing to the behaviour may not have intended to harass but it is about the effect that behaviour has on the victim.”

Employees or workers could experience sexual harassment from anyone they come into contact with at work, whether that’s a fellow employee, a customer, client, manager, supervisor or a member of the public, according to Acas.

Your legal rights if you’re being sexually harassed at work

Sexual harassment is a form of unlawful discrimination under the Equality Act 2010. Harassment because of a person’s sex is also considered unlawful, as sex and gender reassignment are “protected characteristics” under law.

As well as the perpetrator, employers can also be held responsible for sexual harassment at the work place, under what’s called “vicarious liability”.

However small or large a company is, it has a duty to ensure you do not experience sexual harassment in the workplace. Acas states that an employer “must do everything they reasonably can to make sure their employees and workers are protected from sexual harassment.”

If you don’t feel comfortable talking to a senior member of staff to try and resolve the issue, or if the issue is particularly serious, you can raise a formal grievance. This is a letter explaining the problem, with evidence to support the claims, given to whoever is most appropriate, whether that’s your line manager or HR department.

Palmer says: “Workplaces should have their own policy that covers sexual harassment and a good policy will outline who an employee can go to raise a complaint or formal grievance. This can be a line manager, HR, a senior member of staff within the organisation, a special contact or a local trade union rep.”

In many cases, it can be incredibly difficult to come forward about sexual harassment at work, particularly if the perpetrator is a senior member of staff, or even your boss.

Andrew Lloyd, head of employment law at Lloyd Donnelly Solicitors, says: “If someone does not want to approach their employee straightaway, it is nevertheless important to keep a record of the harassment or obtain evidence of it, as they may need it at a later date.

“If harassment occurs, an employee can improve their chances of proving that it has taken place if they keep a detailed diary of what has happened straight away. Even texting or emailing a friend soon as an incident has taken place can be a good contemporaneous record of the harassment taking place.”

Lloyd says that solicitors can help alleviate some of the difficulty between employer and employee in cases of sexual harassment: “A lot of our clients have not reported the harassment to their employer before reporting it to us. We then prepare a grievance letter on our client’s behalf and put pressure on their employer to take action.

“We find that clients feel more comfortable with us taking the first step and a letter from a solicitor carries with it more clout. It shows the employer the matter is being taken seriously and may lead to legal action being taken.”

Fiona Martin, solicitor and director of employment law at Martin Searle Solicitors, says that she would always advise going straight to HR as “the longer sexual harassment goes on, the more damaging it can be”, but turning to other specialist advice services as a first port of call can “help you to gain the confidence to approach your employer and find the support that’s needed.”

“Many workplaces have free counselling services attached to insurance that is confidential. That might be a starting point for victims of sexual harassment, as it’s free, it’s confidential and it’s immediate,” she adds.

A spokesperson from the Equality and Human Rights Commission (EHRC), also said: “If someone feels that they have been a victim of sexual harassment at work and cannot address this with their employer they could contact the Equality Advisory and Support Service (EASS) for advice about a potential breach of the Equality Act.”

Unfavourable treatment for rejecting or submitting to unwanted conduct at work is also considered as harassment under the Equality Act, whether you are being treated unfairly by the perpetrator of sexual assault, or someone else at work.

Lloyd says: “The Act states that if a person treats an employee badly because they have either previously rejected sexual harassment or have even complied with it, that is also unlawful harassment.

“We sometimes have cases where an employee has refused to flirt with a manager or has rejected his romantic advances, and the manager then reprimands or disciplines an employee for very minor incidents, whereas before she rejected him, he would not.”

This type of behaviour is deemed as unlawful under the Equality Act, which means you could take action.

Organisations that can help

The EASS helpline is for people who think they may have experienced discrimination in employment, housing, and transport cases. They can help explain what the law says and how it applies to you, how the situation could be resolved, and refer you to a conciliation or mediation service if the issue can’t be resolved informally.

Rights of Women is a charity that provides free legal advice for women who have suffered sexual harassment at work. It also works to improve the law for women and to increase women’s access to justice.

The Survivors Trust is the largest umbrella agency for specialist rape and sexual abuse services in the UK. It offers a free and confidential support for victims of all forms of sexual violence, abuse and exploitation, via its helpline.

Safeline is a specialised charity that provides support for anyone affected by sexual abuse and rape. It offers free face-to-face counselling services as well as support online and via its helpline.

Acas is an independent public body that works with employers and employees to improve relationships in the workplace. It offers free and impartial advice on employment rights and resolving workplace conflict.

Fri Sep 4 , 2020
The Quad at the SMU Cox School of Business SMU’s Cox School of Business yesterday (Sept. 3) announced it would extend its GMAT/GRE test-optional policy for applicants to all of its graduate programs, including the MBA, for another year. When the pandemic closed test centers in the spring, Cox was […] 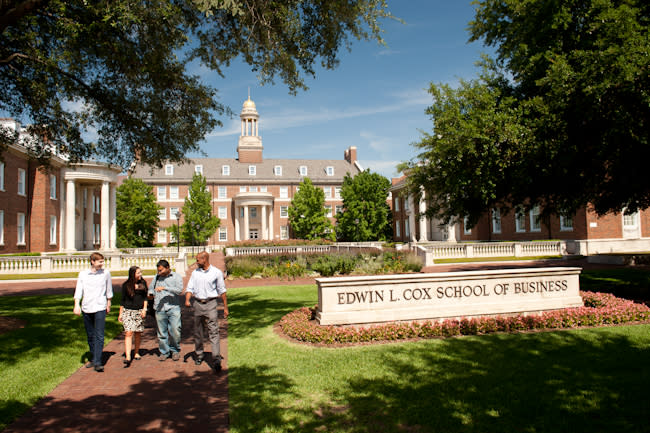