One area in cryptocurrencies attracting huge attention is DeFi or decentralised finance. This refers to financial services using smart contracts, which are automated enforceable agreements that don’t need intermediaries like a bank or lawyer and use online blockchain technology instead.

Between September 2017 and the time of writing, the total value locked up in DeFi contracts has exploded from US$2.1 million to US$6.9 billion (£1.6 million to £5.3 billion). Since the beginning of August alone it has risen by US$2.9 billion.

This has driven a massive rise in the value (market capitalisation) of all the tradeable tokens that are used for DeFi smart contracts. It is now around US$15 billion, almost double the beginning of the month. Numerous tokens have risen in value by three or four times in a year – and some considerably more. For example, Synthetix Network Token has increased more than 20-fold, and Aave almost 200-fold. So if you had bought £1,000 of Aave tokens in August 2019, they would now be worth nearly £200,000.

DeFi, most of it built on the ethereum blockchain network, is the next step in the revolution in disruptive financial technology that began 11 years ago with bitcoin. One area in which in which these decentralised applications (dApps) have taken off is cryptocurrency trading on decentralised exchanges (dexs) such as Uniswap. These are entirely peer-to-peer, without any company or other institution providing the platform.

Other DeFi services now in use allow you to:

DeFi is sometimes known as “Lego money” because you can stack dApps together to maximise your returns. For example, you could buy a stablecoin such as DAI and then lend it on Compound to earn interest, all using your smartphone.

Though many of today’s dApps are niche, future applications could have a big impact on day-to-day life. For example, you will probably be able to purchase a piece of land or house on a DeFi platform under a mortgage agreement whereby you repay the price over a period of years.

The deeds would be put up in tokenised form on a blockchain ledger as collateral and, in the event that you defaulted on your repayments, the deeds would automatically shift to the lender. Because no lawyers or banks would be required, it could make the whole process of buying and selling houses cheaper.

First, regulators have been behind the curve, and DeFi has been able to flourish in this vacuum. For instance, in traditional unsecured lending, there is a legal requirement that lenders and borrowers know one another’s identities and that the lender assesses the borrower’s ability to repay the debt. In DeFi, there are no such requirements. Instead, everything is about mutual trust and preserving privacy.

Regulators are having to weigh the delicate balance between stifling innovation and failing to protect society from such risks as individuals putting their money into an unregulated space, or banks and other financial institutions potentially being unable to make a living as intermediaries. But it seems more sensible to embrace change – and that seems to be happening. In July, the US Securities and Exchange Commission (SEC) made a major shift towards embracing DeFi by approving an ethereum-based fund, Arca, for the first time.

This is welcome and important, since one of the major challenges towards financial innovation is the hostile environment created by archaic regulations written for a bygone era. This has caused some DeFi projects to fail – including major ones such as New-Jersey-based Basis, which returned US$133 million to investors in 2018 when it concluded it couldn’t work within the SEC rules.

A second reason for the DeFi surge is that mainstream players are getting involved. Many high-street financial institutions are beginning to accept DeFi, and seeking ways to participate. For example, 75 of the world’s biggest banks are trialling blockchain technology to speed up payments as part of the Interbank Information Network, spearheaded by JP Morgan, ANZ and Royal Bank of Canada.

Major asset management funds are starting to take DeFi seriously as well. Most prominent is Grayscale, the world’s largest crypto investment fund. In the first half of 2020, it was managing over US$5.2 billion of crypto assets, including US$4.4 billion of bitcoin.

Third is the effect of COVID-19. The pandemic has driven global interest rates even lower. Some jurisdictions, such as the eurozone, are now in negative territory and others such as the US and UK could potentially follow.

In this climate, DeFi potentially offers much higher returns to savers than high-street institutions: Compound, for example, has been offering an annualised interest rate of 6.75% for those who save with stablecoin Tether. Not only do you get interest, you also receive Comp tokens, which is an added attraction. With two-thirds of people without bank accounts in possession of a smartphone, DeFi also has the potential to open up finance to them.

One final important reason for the surge in people putting money into DeFi tokens is to avoid being left out of their explosive growth. Many tokens are worth nothing or close to nothing in practical terms, so we are seeing a lot of irrational exuberance.

But like it or not, we are heading towards a new financial system that is more liberalised and decentralised than before. The central question is how best to guide its development with checks and balances that minimise the risks and spread the potential benefits as widely as possible. That is the challenge for the next few years.

Jeremy Eng-Tuck Cheah does not work for, consult, own shares in or receive funding from any company or organisation that would benefit from this article, and has disclosed no relevant affiliations beyond their academic appointment.

Wed Aug 26 , 2020
Esther George, president of the Kansas City Fed, joined Yahoo Finance on the virtual sidelines of the annual Jackson Hole symposium to discuss the impact of the COVID-19 pandemic on the U.S. economy and how the Federal Reserve is responding. Below is a transcript of her appearance, taped on August 25 […] 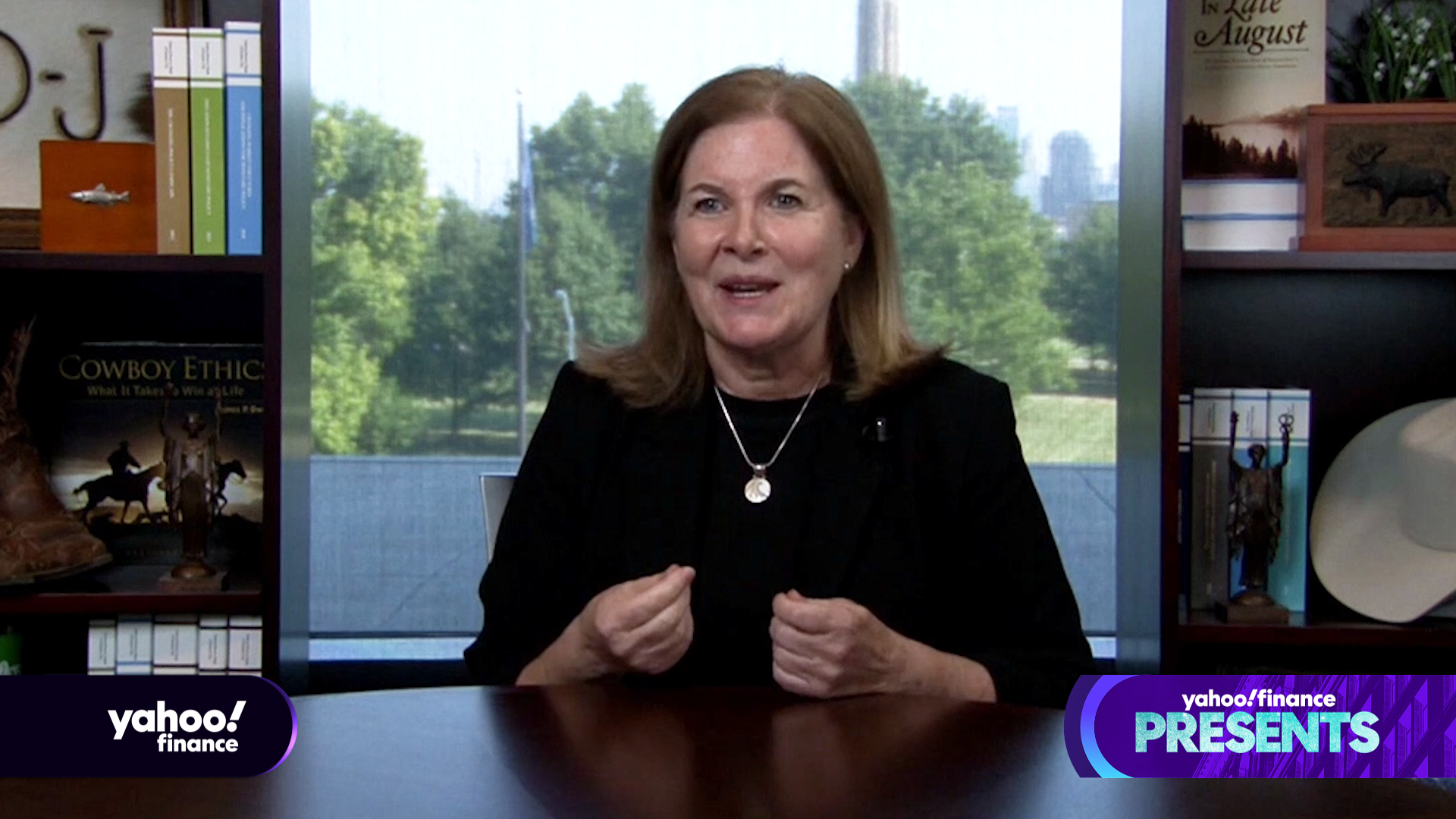