(Reuters) – Here’s what you need to know about the coronavirus right now: Four times as many vaccine doses as population Japan is pushing to grab enough coronavirus vaccine to inoculate its population four times over, hoping to instil confidence that it can host a delayed summer Olympics next year. […]

(Reuters) – Here’s what you need to know about the coronavirus right now:

Four times as many vaccine doses as population

Japan is pushing to grab enough coronavirus vaccine to inoculate its population four times over, hoping to instil confidence that it can host a delayed summer Olympics next year.

Japan is on track to have 521 million doses of five different vaccines in 2021, compared with a population of 126 million. Recent deals include global arrangements with drugmakers such as Pfizer Inc and AstraZeneca PLC, as well as local deals with the likes of Shionogi & Co.

Health ministry and Cabinet Office officials did not respond to queries about whether Japan’s drive to secure coronavirus vaccines was connected to the Olympics.

India reported a record daily jump of 77,266 infections on Friday, taking its total to 3.39 million, data from the federal health ministry showed.

India has reported the highest single-day caseload in the world every day since Aug. 7, a Reuters tally showed, and is the third-most affected country behind the United States and Brazil.

Getting Britain back to the workplace

British Prime Minister Boris Johnson will launch a campaign next week to get Britain back to the workplace, as ministers warn working from home will make people more vulnerable to being sacked, The Telegraph newspaper reported on Thursday.

The campaign will extol the virtues of returning to the office and provide reassurance that it is a safe place, while a new online tool will help people avoid the most-crowded trains and buses, the report said.

The report added that Finance Minister Rishi Sunak is worried about further job losses, as well as the financial cost of running near-empty trains and buses. According to data from The Centre for Cities, only 17% of workers in British cities had returned to their workplaces by early August.

Face masks must be worn everywhere in the French capital from Friday morning to curb a surge in infections, police said on Thursday.

The measure applies to all pedestrians as well as cyclists in Paris and its suburbs in an area that includes three neighbouring departments that form the Petite Couronn inner ring around Paris, a densely populated area with a total population of nearly seven million people. Motorists will not have to wear a mask inside their car.

The reproduction “R” number of infections in France has risen to 1.4, Castex said, meaning that every 10 people with the virus will infect another 14. An R number above 1 can lead to exponential growth.

Fri Aug 28 , 2020
By James Davey LONDON (Reuters) – Britain’s Marks & Spencer (M&S) will make the first deliveries through its new online food shopping joint venture on Tuesday, a cornerstone of its latest attempt to turn the company around and offset problems at its pandemic-hit clothing business. Online grocery shopping has doubled […] 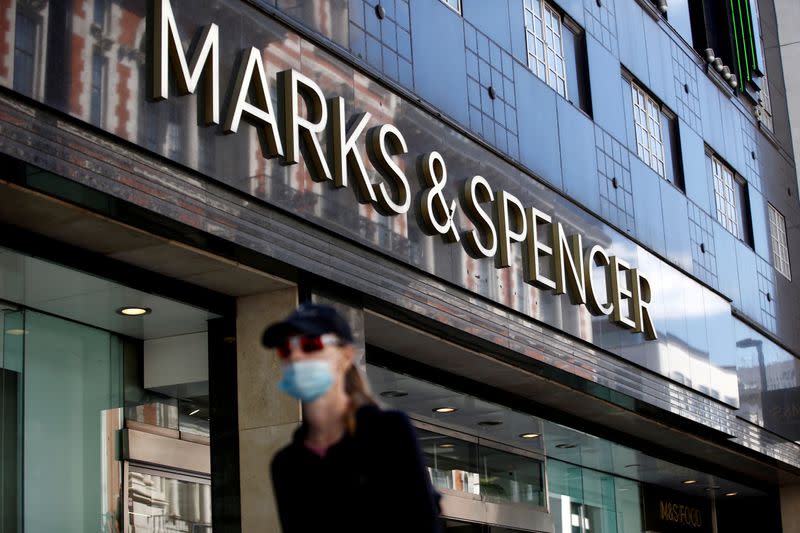