Republicans and Democrats agree they want to give Americans another round of $1,200 relief payments to help ease some of the financial pain from the coronavirus and stimulate the troubled economy. So where’s the money? It’s tied up in a broader clash over COVID-19 assistance, including whether to revive the […]

Republicans and Democrats agree they want to give Americans another round of $1,200 relief payments to help ease some of the financial pain from the coronavirus and stimulate the troubled economy.

So where’s the money?

It’s tied up in a broader clash over COVID-19 assistance, including whether to revive the $600 boost in weekly unemployment benefits that expired last month.

“If we can get a fair deal we’re willing to do it this week,” Treasury Secretary Steve Mnuchin told CNBC on Monday. But no new negotiations are scheduled. Meanwhile, President Donald Trump is trying to get some aid going on his own, through executive orders.

Here’s what we currently know about when or if you’ll get another “stimulus check” — or direct deposit or debit card.

It’s been months since the government’s first COVID-19 assistance payments went out; the IRS started distributing those in April.

Americans affected by layoffs and lockdowns spent the cash on groceries or bills. Those in better situations used the money for splurges, or more practical purchases — like buying affordable life insurance to protect family members if a breadwinner became fatally ill from the virus.

Most people received $1,200 from the government, though the payments started phasing out at higher incomes. Single earners making more than $99,000 and married couples with adjusted gross incomes above $198,000 got no cash at all.

In mid-May, another, similar round of stimulus checks was included in a $3 trillion relief package that passed the Democratic-controlled U.S. House. In late July, the Republican-led Senate rolled out a proposal with just a $1 trillion price tag, though it also called for new $1,200 payments.

The two plans differed slightly in terms of money for kids. The first stimulus payments gave families $500 per child, but only up to age 16. For the next round, the Senate wanted to provide $500 per dependent, no matter how old, while the House approved the full $1,200 for children, to a limit of three per household.

But the political parties — including the Republicans at the White House — haven’t been able to find compromise on that much bigger $2 billion difference between their two proposals. The talks broke down late last week.

Over the weekend, the president signed executive orders intended to restore some of the expanded unemployment benefits and address a few other issues the two sides have been feuding over. But your next stimulus payment is still caught in congressional gridlock.

Once there’s a deal, the checks could start flowing quickly — particularly since the government has already been through the process once.

“If I could get that passed tomorrow, I could start printing them the following week,” Mnuchin told reporters earlier this month. “We did it the first time. I can get out 50 million payments really quickly. A lot of it into people’s direct accounts.”

In the CNBC interview, the secretary said he was hopeful a deal could be reached this week. But first, the two sides need to start talking again, and it’s unclear when that will happen.

No one gets another stimulus check until negotiators can compromise and come up with a bill that would pass both houses of Congress, then be signed by President Trump.

So here’s the bottom line: Washington wants to give you more relief money, but the usual bickering is bogging things down.

If your budget is stretched thin and you could really use that $1,200 payment right now, here are a few ways to find some extra cash immediately.

Wed Aug 12 , 2020
Joanne Millar store manger of Joules in Belfast places a sign in the shop window advising customers that face masks must be worn at all times as face coverings are now compulsory for shoppers. Liam McBurney/PA Images via Getty Images An Arizona man was forcibly carried out of a grocery […] 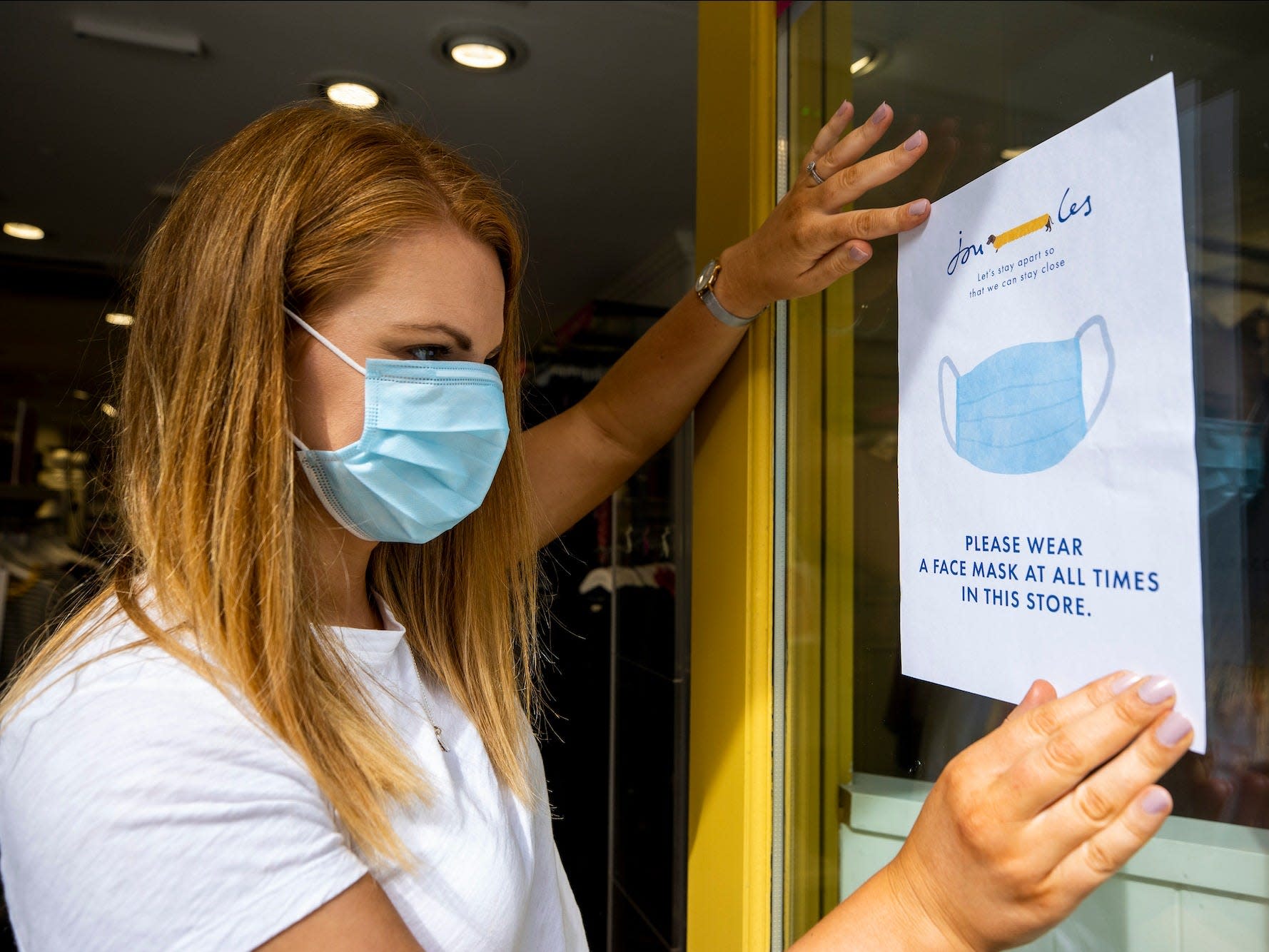