Amazon’s online grocery business is booming, and some Whole Foods employees say it’s causing a crush of problems in stores.

Workers who fill Amazon Prime Now orders — which are purchased online for delivery or pickup from Whole Foods stores — are in some cases clogging aisles, ignoring virus protocols, and exacerbating what Whole Foods employees claim is severe understaffing, according to interviews with seven Whole Foods employees in six states, including three managers. All employees except one requested anonymity to protect their jobs.

A manager at a Northeast Whole Foods store called Prime workers “vultures” that “come in and pick every department clean” before Whole Foods employees can fully restock empty shelves from the previous day.

“The Prime picking starts at 6 a.m. They are picking stuff off the shelves from every department and there is no one to refill it,” the manager said, while adding that his store suffers from understaffing. “We have pallets of groceries just sitting in the aisles and they are desperate to get it on the shelves.”

When Amazon Prime employees — or shoppers, as the company calls them — can’t locate a specific item, they must approach a Whole Foods employee and ask for help. If the item is out of stock, then the Prime shopper must scan a QR code belonging to the Whole Foods employee in order to continue working, employees said.

“What that has led to is already chronically understaffed teams having to stop what they are doing to help assist a Prime shopper to find this item and give them the code,” the Whole Foods manager said.

This QR-scanning process is one of the most frustrating parts of the Prime shopping program, workers said.

“We were bombarded with these people asking us questions when we were trying to do our own jobs,” said Warren Dearman, who recently left his job at a Brooklyn Whole Foods store in part over issues with Amazon Prime shoppers.

Prime shoppers are also unhappy with the QR-scanning requirement, according to one Amazon shopper in Weehawken, New Jersey.

He said requiring the scans is a helpful training tool for new shoppers.

“But for seasoned employees, it’s overkill,” he said. “You are annoying someone else because of a stock problem.”

An employee of a Philadelphia Whole Foods store said Prime shoppers crowd around her when she’s trying to stock shelves.

“I’m basically just a human QR code,” she said. “I’m trying to do my job and I have to stop every 5 minutes to help a Prime shopper and then have them scan my QR code. Sometimes there are so many of them that a line forms behind me to scan my QR code.”

The program’s success has also made it hard to keep shelves full, she said.

“I could put out the blueberries and 10 minutes later they are gone because the Prime shoppers have bought them all,” she said.

In reponse to this story, a Whole Foods spokesperson cited unprecedented growth in demand for online grocery. The spokesperson also highlighted the company’s tests of dark stores, which are closed to the public and function only to fill online orders. Whole Foods recently opened its first permanent online-only store in Brooklyn.

“Online grocery delivery demand experienced unprecedented growth this year, and as we evolve our offerings in real-time, we are constantly evaluating how we can address challenges and work more efficiently,” the Whole Foods spokesperson said. “We’re proud of the ways our teams are adapting to improve our shopping methods and the overall ordering experience.”

Amazon, which owns Whole Foods, did not respond to a request for comment.

Americans are buying more food online than ever before amid virus concerns, with nearly every major grocer reporting a rapid rise in online grocery purchases in recent months.

Amazon has been no exception. The tech giant said in its most recent quarterly earnings report that online grocery sales tripled in the quarter, when compared with the same period last year.

Whole Foods’ South Street store in Philadelphia is so busy with Prime orders that it has run out of space to pack and hold the orders until they are picked up, an employee of the store said. So the order-staging area has spilled into an adjacent parking garage, where Prime shoppers pack groceries on a half dozen plastic picnic tables strewn across empty parking spaces and then store them on nearby metal racks.

Inside Whole Foods’ stores, Prime shoppers crowd aisles and make social distancing difficult, and they are often staring down at their phones and not watching where they are going, several employees said.

“They are everywhere,” the Philadelphia Whole Foods employee said. “It’s like being in a sci-fi nightmare film.”

“Prime Now shoppers are completely unconscious and pose a huge risk to both employees and customers,” he said.

They are “running around the store as fast as they can to fill orders as quickly as possible” and appear to rarely glance up from their phones, he added.

He said his store is overrun with Prime Now orders, and by mid-morning will have as many as 150 orders in the daily pipeline.

“In some cases the store might be empty of the public shopping, but zipping around the store will be all the Prime Now shoppers,” he said.

A Whole Foods spokesperson said all in-store workers abide by the same safety measures, including social distancing, wearing face masks, and daily temperature checks. The company also cited a study by the research firm Ipsos that named Whole Foods Market the top grocery retailer for its COVID-19 safety measures. The researchers said that employees were wearing masks properly in all the Whole Foods stores they visited.

Amazon initially hired and managed all Prime shoppers when it first rolled out the Prime pickup and delivery program in Whole Foods stores in 2018. The company now uses at least two different employment structures, which are internally referred to as “cardinal” or “bison” models, employees said.

Several Whole Foods employees said they prefer the idea of the bison model, either in theory or through direct experience, because it gives Whole Foods managers more control over the Prime shoppers and makes everyone feel as if they are part of the same team.

An employee of a Chicago-area “cardinal” store where Amazon employs Prime shoppers said “there’s a total disconnect” between the two groups of employees.

“They work in our store and with us all the time but are not our team members,” she said.

She cited problems with Prime shoppers failing to properly distance and wear masks, while “completely ignoring the one-way aisles.”

“We realize customers will ignore it but its egregious when the Amazon shoppers do it too,” she said.

At the same time, Whole Foods employees are instructed to treat Amazon Prime shoppers as customers, and can be disciplined for being rude towards them, she said.

Mounting tensions with the Prime Now program come at a time of declining morale among Whole Foods’ employees, workers said.

She said surging Amazon Prime orders have added to the stress that Whole Foods workers are feeling.

“We have fewer team members than ever before because labor budgets have been slashed over and over again, and then you have Amazon shoppers coming around asking for something,” she said.

The Northeast Whole Foods manager said when he joined the company, employee happiness was a strong focus. Now, he said, “everyone I know feels overworked and underpaid.”

If you are a Whole Foods employee with a story to share, contact this reporter at [email protected]

Buckingham Palace Has Responded to Prince Harry’s Call to Vote

Thu Sep 24 , 2020
Samir Hussein, Getty Images Meghan Markle and Prince Harry are urging Americans to exercise their right to vote in the upcoming presidential election. But Buckingham Palace, in true Buckingham Palace fashion, is distancing itself from all that. On September 22nd—aka National Voter Registration Day—the Duke and Duchess of Sussex appeared […] 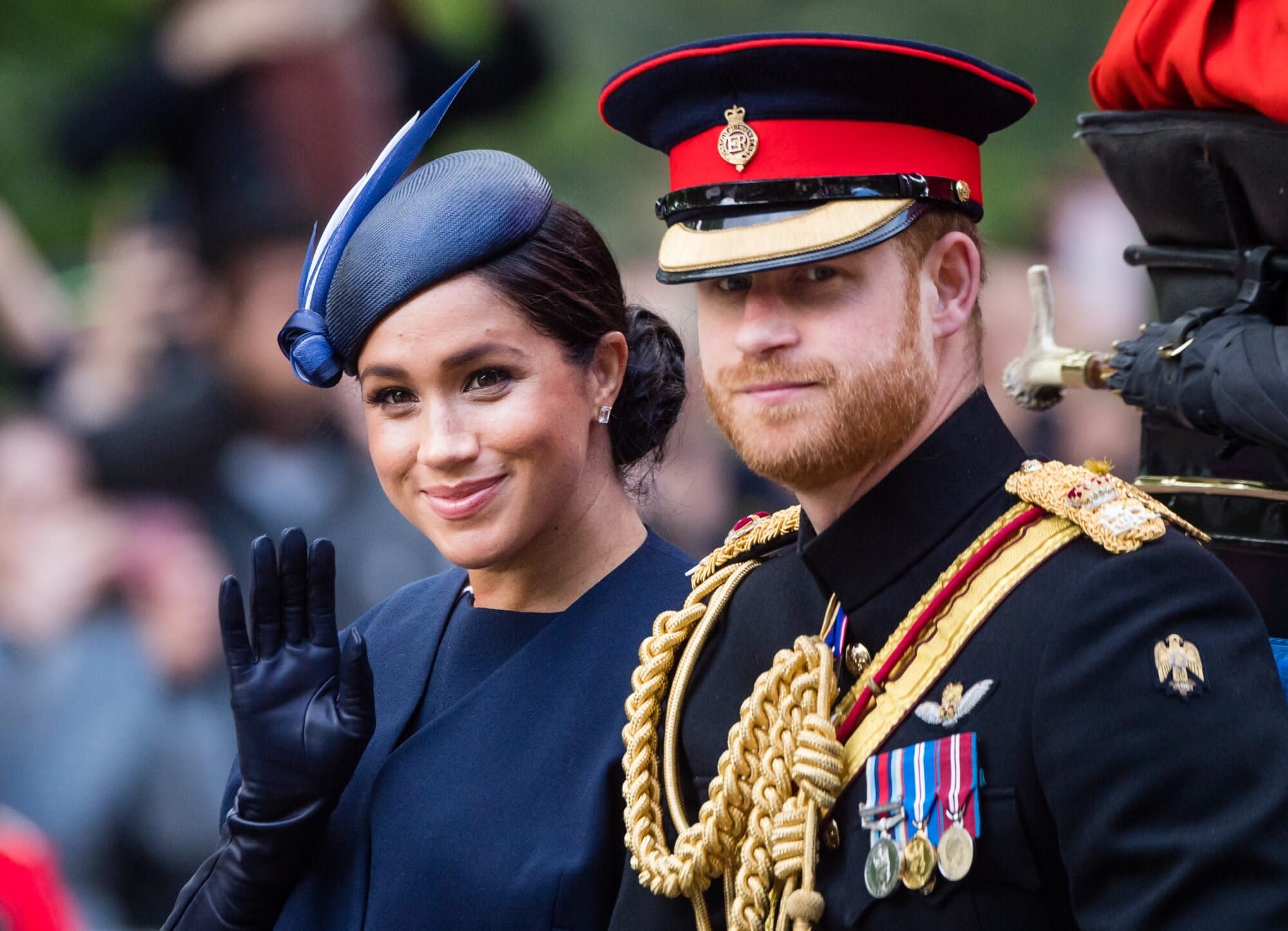