Now that Ant Group’s would-be record initial public offering is on ice, what’s next for the high-flying fintech behemoth and the investors who hoped to make a quick killing? Both may be in for a long wait as Ant Group adapts its business to tough new regulations on microlending, one […]

Now that Ant Group’s would-be record initial public offering is on ice, what’s next for the high-flying fintech behemoth and the investors who hoped to make a quick killing?

Both may be in for a long wait as Ant Group adapts its business to tough new regulations on microlending, one of the company’s biggest business drivers, according to analysts, investment bankers and market experts. And whenever it comes back to the market, Ant is likely to face a significant haircut off its valuation of 2 trillion yuan ($302.5 billion).

The shockwaves of the suspension will spread far beyond Ant Group and affect other fintech companies weighing initial public offerings, an investment banker said. They include JD Digit, the fintech arm of JD.com, which in September issued a prospectus for a 20 billion yuan offering in Shanghai, eyeing a valuation of 200 billion yuan.

How regulators put Ant Group’s booming online credit business under oversight will set an example for regulation of the rest of the industry, a person close to China’s central bank said. The issuance of new draft rules on Nov. 2 for online microlending activities forced the surprise suspension of Ant Group’s debut, planned for three days later.

Ant Group apologized to investors who put up trillions of yuan to subscribe for its shares and promised to properly handle follow-up issues. Procedures for refunding investors have started in Hong Kong and Shanghai.

The regulations proposed by the People’s Bank of China and the China Banking and Insurance Regulatory Commission stipulate stricter standards for a range of operational and financial metrics including leverage levels, joint lending and cross-province business.

The move caught Ant by surprise. Hours earlier, Ant Group staffers had finished all setups and rehearsals for the stock debut on the Shanghai Stock Exchange.

“It seems Ant Group wasn’t aware of (the changes) beforehand and was not prepared,” an investment banker said.

Ant Group had marched at lightning speed toward its mega IPO since the plan was announced in July, sparking an investor frenzy. But the triumphant sentiment quickly turned on Nov. 2 when top financial regulators in China summoned the company’s top executives, including billionaire founder and controlling shareholder Jack Ma, for a regulatory interview.

Regulators called off Ant Group’s share sale in Shanghai late on Nov. 3. Half an hour later, Ant Group issued a statement on the Hong Kong bourse saying the concurrent offering in the city was also suspended. The dual listing had been set to become the world’s biggest ever, raising $34.5 billion.

Controversy surrounding Ant Group flared up in late October after Ma publicly criticized local and global financial regulators for hampering innovation in the name of preventing risks. At a high-level financial summit in Shanghai, Ma compared the Basel Accords, which set out global capital requirements for banks, to a club for the elderly and blasted regulators for not paying sufficient heed to development and opportunities for the young. 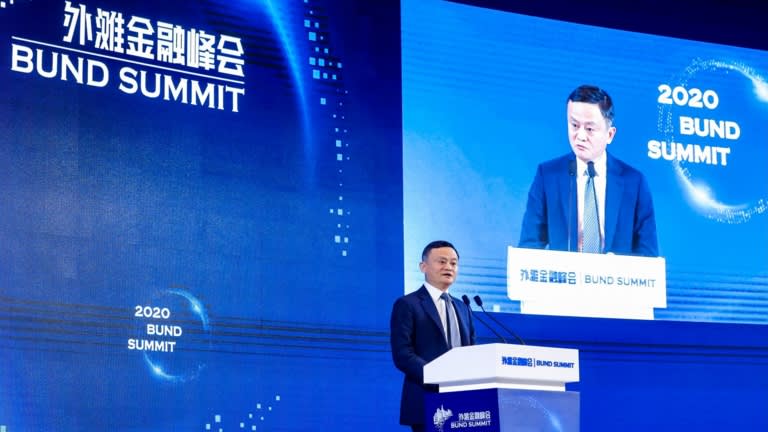 Jack Ma attends the Bund Summit in Shanghai on Oct. 24.

The remarks stirred public debate, as some experts criticized Ma for downplaying the inherent risks of financial innovation.

Several senior government officials attended the same summit, including Chinese Vice President Wang Qishan, who called for balance between financial innovation and supervision. Application of new financial technologies and the emergence of new businesses have increased efficiency and convenience but also have amplified financial risks, Wang said at the conference.

Ma’s comments apparently caught the attention of regulators. One week after the summit, the State Council, China’s cabinet, at a meeting emphasized the importance of regulatory oversight and risk control treating all business players fairly.

An article published by a central bank-backed newspaper said regulators should deliberate on the supervision of Ant Group as the company has grown into a conglomerate that combines a wide range of financial and nonfinancial businesses.

Backed by the popular payment service Alipay, Ant Group has tapped into a sprawling array of financial services including online banking, insurance, wealth management and credit, but it has not been subject to the same capital adequacy and leverage requirements as traditional financial institutions.

The article suggested drawing a clear boundary between Ant Group’s financial and nonfinancial businesses while integrating similar services so that every aspect of its businesses can be covered by proper supervision and follow related risk-control requirements.

The booming online microlending sector backed by fintech companies remains a key concern of regulators due to risks of excessive leverage.

Ant Group is the biggest online consumer credit provider in China through its Huabei platform, which offers credit lines for small unsecured loans to customers for daily expenditures, and Jiebei, which offers short-term unsecured loans for larger transactions, according to Ant’s IPO prospectus. The online microlending business segment has become the company’s biggest income driver, contributing nearly 40% of revenue and 48% of net profits.

The proposed regulations on microlending, if approved in their current form, will create headaches for Ant Group as they may force the company to change the way it raises money to fund Huabei and Jiebei and crimp their expansion in the short term, analysts said.

Changes in fintech industry regulations will have a “huge impact” on Ant Group’s operational structure and profit model, said the China Securities Regulatory Commission in a statement backing the Shanghai bourse’s decision to suspend the offering.

Regulators can use Ant Group as the sandbox for the biggest and most complicated supervisory experiment for fintech companies, a person close to regulators said.

“Financial regulatory bodies have been discussing the supervision framework for financial technology companies for a long time, and related studies are already in front of authorities,” a regulatory official said. “It is just a question of time to make the determination.

The draft online microlending rules would mean a major revamp to Huabei and Jiebei, which managed a combined 2.15 trillion yuan of outstanding loans as of the end of June, according to Ant Group’s prospectus. The two platforms are operated by companies registered in the municipality of Chongqing in Southwest China — Chongqing Ant Shangcheng Micro Loan and Chongqing Ant Small and Micro Loan.

The more pressing change for Ant Group in the new rules is tighter oversight of joint loans that originate through cooperation with other financial institutions. Online microlenders should fund at least 30% of any joint loan with financial institutions, according to the draft, which does not specify what the percentage is currently. Caixin previously learned that some microlenders contribute as little as 1% to 5%.

According to Ant Group’s prospectus, about 1.75 trillion yuan of loans issued through its online credit platforms were through cooperation with banks. Ant Group helped market about two-thirds of the loans while putting its own money into the rest.

With its control over massive online traffic, Ant Group has partnered with more than 400 financial institutions in offering credit services to online shoppers. Ant Group charges the banks service fees or shares part of their interest income from the loans. Sources told Caixin that Ant Group often contributes 1% to 10% in the joint loans issued with banks, far less than the 30% requirement.

To meet the new hurdle would mean that Ant Group would have to either dramatically reduce its loan size or increase capital by billions of yuan, analysts said.

Millions of investors were rattled by the suspension of the offering. Ant Group and its underwriters have started to refund investors who subscribed to buy the stock, but some investors will still bear losses, especially for those who borrowed heavily for the investment.

A record 1.55 million mom-and-pop investors subscribed to the Hong Kong portion of the dual offering, putting up HK$1.3 trillion ($167.69 billion) for the shares. A local newspaper reported that financial institutions in Hong Kong loaned as much as HK$519.2 billion to Ant Group IPO investors. Banks and brokers offered low interest rates of 0.5% to 4% annually, leading to interest costs for investors totaling HK$36 million to HK$284 million for the five days before the scheduled debut, according to Caixin calculations. Ant Group promised that Hong Kong investors would get refunds on Nov. 4 and 6.

Hong Kong’s Financial Services and Treasury Bureau said the incident will not affect the stability of the city’s financial system.

On the mainland, underwriters of the Shanghai offering also pledged to return funds and brokerage commission fees plus interest to investors. The money should be back in investors’ accounts by Nov. 9, and the shares they subscribed to were canceled on Nov. 6, Ant Group said.

There are also more than 10 million retail investors who put up 60 billion yuan with five publicly offered funds that were set to acquire 11.97 million yuan of Ant’s shares along with other assets. With Ant Group’s offering suspended, some investors demanded refunds or changes in the funds’ investment terms.

Regulators urged fund managers to fully consider the reasonable demands of investors, work out a feasible plan in accordance with the law, and effectively protect the legitimate rights and interests of investors.

The CSRC said in a separate statement that the decision to suspend a “hasty” IPO of Ant Group amid a changing regulatory environment will protect investors and ensure accurate, transparent information disclosure.

A person with knowledge of the situation said regulators’ decision to halt the offering followed consultations with some domestic and overseas investors to make sure the losses caused by the suspension were acceptable. If the regulatory changes had come after Ant Group’s flotation, it might have led to significant fluctuation of the stock and cost investors even more, the person said.

According to the rules of Shanghai’s STAR Market, Ant Group has one year to complete its offering. But analysts said they do not expect a resumption of Ant Group’s IPO to come soon. It will take time for the company to comply with the new rules and seek a new valuation, they said.

Most analysts interviewed by Caixin said they thought Ant Group’s valuation will be significantly affected by the regulation changes. Some said the current valuation is too high.

“The precondition of (IPO resumption) is to fully meet regulatory requirements,” one industry expert said. “It won’t only affect Ant Group’s valuation but also force a great reduction of the size of businesses such as Huabei and Jiebei.”

Tue Nov 10 , 2020
The European Commission (EC) has said it believes that Amazon is breaching EU competition rules by unfairly using independent sellers’ data. The EC is now opening a second investigation into some of the online retail giant’s processes. An antitrust investigation against Amazon was launched one year ago by the EC […]