Linkedin recently launched a major campaign which features real community members and their stories, in a year when job and business confidence could take a hit, The Drum spoke to Linkedin to get underneath the strategy. In a biweekly ‘Workforce Confidence Index’ survey that LinkedIn launched to understand how professionals […]

Linkedin recently launched a major campaign which features real community members and their stories, in a year when job and business confidence could take a hit, The Drum spoke to Linkedin to get underneath the strategy.

In a biweekly ‘Workforce Confidence Index’ survey that LinkedIn launched to understand how professionals feel about their jobs, finances, and careers during these testing times, the India findings were interesting. Despite the pandemic, India has remained cautiously optimistic throughout the period, with a renewed focus on building new skills to make the best of these times, the findings showed. This is possibly one reason why India features majorly in the world’s largest professional network’s scheme of things.

Making an advert with real people

The prolific professional network recently launched a new brand campaign in some of its key markets like India and Australia. The campaign narrates real-life stories of some real consumers and shows how their lives changed by deploying the power of the social network – they found new jobs and learnt new skills by leveraging the power of community on LinkedIn.

Pivoting the go-to-market strategy in a fast-changing world

Explaining the backdrop of the campaign and also how the business model navigated the last few months of the pandemic scenario, Srividya Gopani, director of brand and consumer marketing, Asia Pacific and China, LinkedIn, shares, “in the past six months, we have seen the community on LinkedIn become more active, engaged, and helpful to each other, and we have seen members reach out to their networks to ask for and to give help.”

About the brand’s go-to-market strategy pivoting keeping in mind the post-pandemic landscape, Gopani avers that in this global crisis, their intent is to provide the members with insights, inspiration, and information that can help them take the first step to move forward. This pivot is happening via a bunch of things. As the world navigates a tough job scenario, the platform has introduced relevant tools and resources to make it easier for members to find jobs, develop new skills, and discover content that can help build their professional profiles.

Upskilling through online learning has become supremely important. Recently, LinkedIn launched the most popular LinkedIn Learning courses of 2020 that help members sharpen their skills and future-proof their careers in a rapidly evolving and digitizing economy, she shares.

A global skills initiative was launched with Microsoft in June 2020 to bring more digital skills to 25 million people worldwide by the end of this year. Making 10 role-based learning paths and four soft skill courses available for free, this initiative has reached a large number of global audiences.

Along with helping millions of people get back to work, the platform is also doing its bit to ease the pressure with a series of initiatives.

It recently introduced the ‘Career Explorer’ tool that helps job-seekers find new jobs by mapping their skills to open roles. In addition, the recently #OpentoWork feature helps members advance their careers with support from their communities and network.

In order to make the professional life a bit more social in a locked-down world, India-specific ‘Stories’ was launched with an idea “to help members share everyday professional moments and experiences with their communities more casually, creatively, and authentically.”

Keeping the backlash at bay

Even as engagement on the platform grows, LinkedIn unlike the other social media players like Facebook and twitter has mostly kept itself away from controversies or consumer backlash, both of which are in abundance as the world becomes increasingly connected and many feel – intolerant. Agrees Gopani who has just completed 10 years at the professional networking site and shares, “we continue to ensure our members are having safe conversations, and we have clear policies that we work to enforce consistently.” In addition, the platform continues to introduce changes and new controls for the members to foster safe, respectful, and professional conversations.

The last few months have been good for the social networking brand as more and more people came onboard. Conversations on the platform have seen a 55% year-over-year increase from March 2019 to March 2020, and content shared on the platform is up nearly 50% year over year.

With COVID on the rampage, will you get a 2nd stimulus check soon?

Mon Nov 16 , 2020
With COVID on the rampage, will you get a 2nd stimulus check soon? As Washington settles down after the election and with the COVID-19 pandemic looking worse than ever across the U.S., government officials are talking about pumping more relief into the economy quickly. “Congress must now do a Covid […] 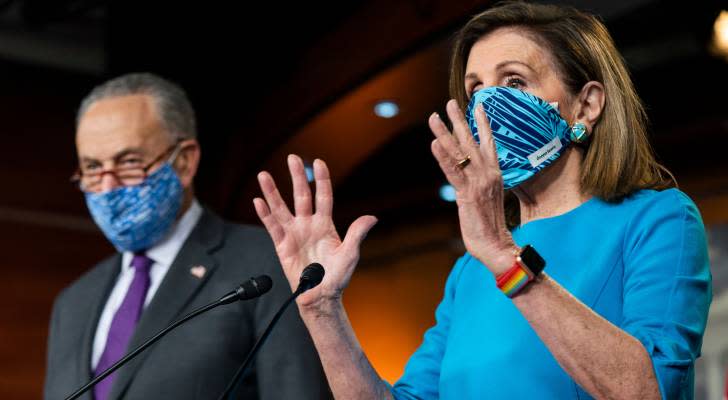