Hundreds of advertisers say they won’t spend money on Facebook in July or beyond over concerns the social media company isn’t doing enough to stop hate speech.  But the exodus of spenders may not be enough to push CEO Mark Zuckerberg to make the level of change that critics are demanding.  Critics have an initial […]

Hundreds of advertisers say they won’t spend money on Facebook in July or beyond over concerns the social media company isn’t doing enough to stop hate speech.  But the exodus of spenders may not be enough to push CEO Mark Zuckerberg to make the level of change that critics are demanding.

Zuckerberg and top executives, who have agreed to meet with the civil rights groups behind the Stop Hate for Profit boycott this week, plan to release the company’s third civil rights audit, which Facebook says will address many of the activists’ concerns, as well as other policy changes that were already under consideration.

The pressure on Facebook seems intense, but it may not be as powerful as the headlines make it appear.

Brands that are boycotting Facebook make up a small percentage of the company’s revenue and they are pulling ad dollars at a time when many had already dialed back spending. And these advertisers are discovering that they can get better exposure right now from not advertising on Facebook than advertising on it.

For their part, investors have been largely unconcerned. Though the stock dipped when the boycott began attracting major consumer brands, it’s bounced back with the expectation that this corporate boycott, like others before it, will peter out. Analysts even told investors that the short-lived drop presented a good opportunity to buy shares.

Facebook while black: Users call it getting ‘Zucked,’ say talking about racism is censored as hate speech

George Floyd protests: Black employees speak out on racism and discrimination in the workplace

Facebook has another consideration in the run-up to the presidential election. Most of the engagement on its platform is from conservatives and much of the outrage fueling the boycott comes from controversial posts by President Donald Trump.

Add to that the fact that Facebook users, many of whom are older, have a tougher time quitting the social network and Zuckerberg may be right that he doesn’t have much to worry about.

“Do I think that the current crisis is one that potentially dooms Facebook? The answer is no,” says Harvard Business School professor David Yoffie.

But, says Yoffie, “the longer-term danger to Facebook is that Mark’s position on content curation is ultimately going to seriously impact the brand.”

The quandary for Facebook: Its platform reflects the political demographics and conflicts of the American electorate – with one important difference: the outsize influence of conservatives there.

“While the nation skews liberal in population size, conservative and liberal are even on Facebook,” says Dennis Yu, CEO of social analytics company BlitzMetrics. “When you look at relative engagement, conservatives are significantly larger.”

Of Facebook users’ interactions with the top 10 political media outlets on the platform, conservative pages accounted for about 78% from June 23 to June 30, according to data from CrowdTangle, a public insights tool owned by Facebook. Conservative voices Ben Shapiro  and Breitbart alone represented more than 70%.

Trump’s  presence on Facebook dwarfs that of his presumptive Democratic challenger, former Vice President Joe Biden. In June, Trump’s main Facebook page got nearly 11 times more interactions than Biden’s, according to CrowdTangle data. Trump got more than seven times as many video views and added twice as many page likes during that period.

Even in the face of growing pressure from the boycott, Zuckerberg says he is standing by his belief that everyone should be able to see what politicians say, even when their claims are false or inflammatory.

Last month, the Facebook CEO called out Twitter for fact-checking a Trump tweet, saying social media platforms should not police political speech. “I just believe strongly that Facebook shouldn’t be the arbiter of truth of everything that people say online,” he told Fox News.

That position when it comes to Trump’s posts, the same ones that Twitter flagged as glorifying violence or misleading Americans, has wedged Zuckerberg between a rock and a hard place, Yoffie says.

Zuckerberg may not have to. Facebook recently reported that it had more than 7 million active advertisers and more than 90 million business pages. The vast majority of them aren’t going anywhere.

Of the advertisers that announced Facebook boycotts as of Tuesday, only 13 were in the top 1,000 spenders on Facebook ads in the U.S. for Jan. 1 through June 27, according to ad database and marketing analytics firm Pathmatics.

Those advertisers – including Pfizer, Microsoft and Unilever – accounted for less than 3% of the more than $4 billion spent on Facebook U.S. ads during that period, according to a USA TODAY analysis of Pathmatics data.

Disney, which has not announced a boycott as of Friday, was the top advertiser on Facebook in the U.S. during that period. It spent $211 million, which was about $95 million more than the top 10 Facebook boycotters combined, according to Pathmatics.

Several advertisers that announced Facebook boycotts – including Denny’s, Eddie Bauer, Jansport and North Face – didn’t register in the top 1,000 ad spenders on Facebook in the first half of the year.

While major corporations grab the headlines, about one-third of Facebook’s ad revenue comes from small and mid-sized businesses, according to Third Bridge.

The effectiveness of the Facebook platform, which allows marketers to narrowly target their spending based on specific demographic characteristics, is too compelling for many advertisers to give up.

“There definitely are alternatives, but some of the reasons seemingly that Facebook has been so successful is because they do provide very straightforward, easy-to-use solutions that frankly work for a lot of advertisers,” Kessler said.

Internally, Zuckerberg has told employees he expects advertisers will return “soon enough” and pledged that Facebook would not yield to threats from advertisers who represent such a small share of Facebook’s revenue, according to tech news service The Information.

Does that mean the Facebook boycott will fail? Not necessarily, says Maurice Schweitzer, a professor at the University of Pennsylvania’s Wharton School who has studied boycotts.

When the Stop Hate for Profit campaign launched nearly three weeks ago, it hadn’t lined up a single advertiser. Now it has more than 400.

Facebook has rushed to reassure advertisers that it takes these issues seriously, saying it spends billions to make its platforms safe and works with outside groups to review its policies. Facebook’s vice president of global affairs, Nick Clegg, published an open letter Wednesday saying the company “does not profit from hate.”

Most boycotts driven by consumers fail because “people don’t persist in changing their behaviors,” he said. This one is driven by corporations that may not back down because of pressure they’re facing from their employees and customers to take a stand, he said.

“They can channel literally millions of dollars and have a direct and immediate impact,” Schweitzer said. “This boycott is really putting a squeeze and is exerting much more pressure on Facebook than the average call for the boycott.”

Schweitzer said Facebook could end up making concessions that at least partially satisfy critics. Or the pressure on Facebook may decline following the presidential election, particularly if Trump, the central figure driving much of the tension, loses to Biden.

Facebook has long been aware of the possibility that divisive and harmful content on its platform could hurt its financial prospects, particularly with the nation gripped by civil unrest and a deadly pandemic.

“We may be subject to negative publicity if we are not successful in our efforts to prevent misinformation or other illicit or objectionable use of our products or services in connection with the COVID-19 pandemic, the 2020 U.S. presidential election or other elections around the world,” Facebook warned in a public filing in April. “Any such negative publicity could have an adverse effect on the size, engagement and loyalty of our user base and result in decreased revenue, which could adversely affect our business and financial results.”

As more corporations join the boycott daily, investors have become increasingly concerned about the financial implications.

“I don’t think there’s any question that it is very quickly becoming a risk factor that people probably need to pay attention to,” said Scott Kessler, global sector lead for technology, media and telecommunications at market research firm Third Bridge.

The number of people who used Facebook services at least once per month in the first quarter of 2020 totaled 2.6 billion, up 10% from a year earlier. That’s one-third of the world’s population, according to the United Nations Population Fund.

Facebook’s saving grace could be Instagram, which is driving growth. Many users and advertisers treat the photo-sharing social media app as distinct from Facebook, even though they’re part of the same company.

“Most of the discussion seemingly has been around the Facebook platform, as opposed to the other platforms, including Instagram,” Kessler said.

It pulled in $70 billion in ad revenue last year, despite threats of government regulation and user defections. The company’s first-quarter revenue rose 17.6% to $17.7 billion, while its net income more than doubled to $4.9 billion. And, even with the pandemic slowing ad sales, analysts say Facebook is on track to grow revenue this year, but not by as much.

So far the effort to punish Facebook hasn’t had a big impact on its stock, despite some bumps.

Facebook shares closed at $235.53 on Wednesday, June 17, the day a coalition of groups, including Color Of Change, the NAACP and the Anti-Defamation League called on advertisers to pause spending on the social network. The stock’s price rose over the next four days, hitting a June high of $242.24 the following Tuesday, even after prominent brands like Ben & Jerry’s, Patagonia and REI joined the boycott.

However, as more brands flocked to the protest, including giants like CVS, Coca-Cola and Unilever, the stock dropped 11%  from its peak the prior week, closing at $216.08 on Friday, June 26. It has since cut those losses, rising to $233.42 on Thursday, as investors assessed the situation.

“Even if all the advertisers boycotted Facebook for a full year, it would be less than 1% of revenues by our math,” said Colin Sebastian, senior research analyst with Baird Equity Research. “The stock is going to reflect that anticipated impact on revenue and profits as opposed to expressing any underlying view about whether Facebook is handling these issues properly from a broader social perspective.”

This article originally appeared on USA TODAY: Trump and hate speech: Facebook boycott may not change much

Mon Jul 6 , 2020
Wall Street wrapped up its best quarterly performance in decades buoyed by a combination of unprecedented levels of fiscal and monetary stimulus, a technology sector boom, hopes of a coronavirus vaccine and easing of lockdown measures. Nasdaq outperformed, having climbed 30.6% — the best since fourth quarter 1999. The S&P […] 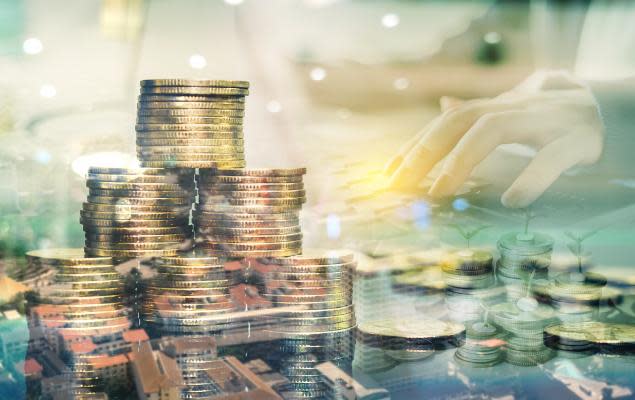