Charissa Brock knew from a young age that she wanted to be an artist. The Portland, Ore., based sculptor began sculpting with bamboo in 1999 and later incorporated glass into her pieces, a nod to her mother’s work as a glass artist. Brock sells her work through her website and […]

Charissa Brock knew from a young age that she wanted to be an artist.

The Portland, Ore., based sculptor began sculpting with bamboo in 1999 and later incorporated glass into her pieces, a nod to her mother’s work as a glass artist. Brock sells her work through her website and online platforms like Etsy
ETSY,

and Artful Home, and she also teaches out of her home studio.

But when the COVID-19 pandemic hit, Brock said, “it felt like the whole world was shutting down.” She lost a chunk of income when she had to cancel a year’s worth of classes indefinitely, and lost potential sales from galleries and art fairs.

“As an artist, I thought, ‘Oh my gosh, nobody’s going to buy art when they’re going to be struggling to buy food,’” she said.

Brock said her business has been “greatly impacted” by the pandemic, but she’s hoping a new campaign called Artists Sunday will give her bottom line a lift.

The nationwide initiative encourages consumers to do their holiday shopping with local artists and craftspeople. Photographer and entrepreneur Chris Sherman founded the movement when he noticed a bump in sales for his own photography on the Sunday after Thanksgiving last year.

Sherman started reaching out to recruit artists across the country in May, and now the campaign has brought together more than 3,000 participating artists and 400 arts, civic and economic development partner organizations who are promoting the idea of buying art this shopping season.

Sherman calls the art-focused shopping day, Nov. 29 this year, a virtual “national art fair with artists participating from all 50 states.”

It’s free for artists to join the online directory, and Sherman said the Artists Sunday team provides artists with a marketing toolkit and e-commerce tips.

“Artists love to be artists,” he said. “Many of them don’t want to focus on the business side — they’d rather be out there making art. We’re trying to streamline that process for them so they can focus on their passion.”

Sherman said Artists Sunday fits right in with all of the other shopping and spending events leading up to the holiday season, such as Black Friday, Small Business Saturday, Cyber Monday and Giving Tuesday. Sherman came up with the idea for Artists Sunday before the pandemic, but when state governments across the country started instituting lockdowns in the spring, he shifted his planning for the event into high gear.

“We know there’s a lot of anxiety in the world right now, and many festivals and art fairs are being unilaterally canceled,” he said. “Artists can’t connect with consumers in a way that they would normally.”

The creative economy has been hard hit by the pandemic

Creative industries nationwide have lost an estimated 2.7 million jobs and $150 billion in sales this year, according to an August study by the Brookings Institution.

“The creative economy is one of the sectors most at risk from the COVID-19 crisis,” the report reads. “Arts, culture, and creativity are one of three key sectors … that drive regional economies. Any lasting damage to the creative sector will drastically undercut our culture, well-being, and quality of life.”

The pandemic has put the fine and performing arts industries at a “crisis level,” said Michael Seman, an assistant professor of arts management at Colorado State University and one of the authors of the Brookings report.

But, Seman said, it’s not a total loss. The pandemic has shifted both artists’ and art consumers’ perspectives on the art business.

“We all know that the COVID-19 crisis has just devastated the arts,” he said. “But what we are now learning is there are more channels to help fund the arts, and now we can embrace those.”

He added, “I would have never thought of going to the internet to buy a piece from a gallery. But now that’s definitely an option.”

Some artists are offering discounted prices and free shipping

Sherman said he wants Artists Sunday to help artists compete with doorbuster deals at big-box stores that get the lion’s share of sales during the holiday season.

One way to do that, he said, is to approach marketing and sales like these larger companies.

“Consumers react to a promotion, so the idea is to get artists to think that way as well,” he said. Some artists participating in the campaign are offering deals such as discounts on their work and free shipping.

And even though people might have tighter holiday spending budgets this year, Seman said he still sees a demand for art.

“Some people are actually more interested in buying art because we’re all stuck at home,” he said. “People are inside and now they’re reimagining their spaces.”

Brock said her jewelry sales have been down since the pandemic because people aren’t going out as much, but that her larger sculptures meant to display in homes are still relevant.

“Because people are in their homes more, and they’re examining the spaces that they live in and trying to make them more compatible with being in their home for longer periods of time,” she said.

A handmade gift can also serve to bring people together when everyone is so isolated, Sherman said.

“It allows you to maintain that connection with family in a very personal way, especially if you’re social distancing,” he said.

One Washington town is hosting an art walk

One town in Washington state is combining an already vibrant artist community with the Artists Sunday campaign to help bolster the local economy. In Issaquah, economic development leaders are making use of some shuttered storefronts and restaurants to showcase artists.

Corby Casler, the executive director and program manager of the Downtown Issaquah Association, said local artists will display their work on Artists Sunday, and that the city will provide a walking map so people know where to shop while still being safe.

In July, the Washington State Arts Commission designated Issaquah as a certified Creative District, so partnering with Artists Sunday “was a natural for us,” Casler said.

“That designation not only helps us with grants, but it’s also an acknowledgment that we can use art as an economic development tool,” she said. “So that’s exactly what we’re doing for Artists Sunday.”

While Artists Sunday could give a short term boost to artists, Seman said the United States will need a more substantial creative economy recovery strategy.

He called for a cabinet-level position in the White House for arts, culture and the creative economy to examine how the government can better integrate arts and culture within all aspects of American society like healthcare and housing and urban development. Seman also called for better economic support for artists.

“Artists are  pretty much the poster children of the gig economy, so let’s make them eligible for unemployment insurance,” he said. “We’re so far behind other countries in that situation, and yet we produce many of the leading creative minds in the world,” he said. “If we just gave more support, it would be unbelievable what we could do.”

For Brock, Artists Sunday means more visibility for her work. She said she looks forward to the opportunity to sell to a wider audience.

“I’m really hoping I get to use some of the cardboard boxes that I bought to ship things out in,” she said.

Sat Nov 28 , 2020
The online game “All Bad Cards” can bring friends together during the pandemic — especially friends who enjoy raunchy humor. (Jake Lauer) Forget about resurrecting a sourdough starter, filming TikTok videos or binge-watching “The Crown.” In the quest for virus-safe fun during the pandemic, my friends and I have been […] 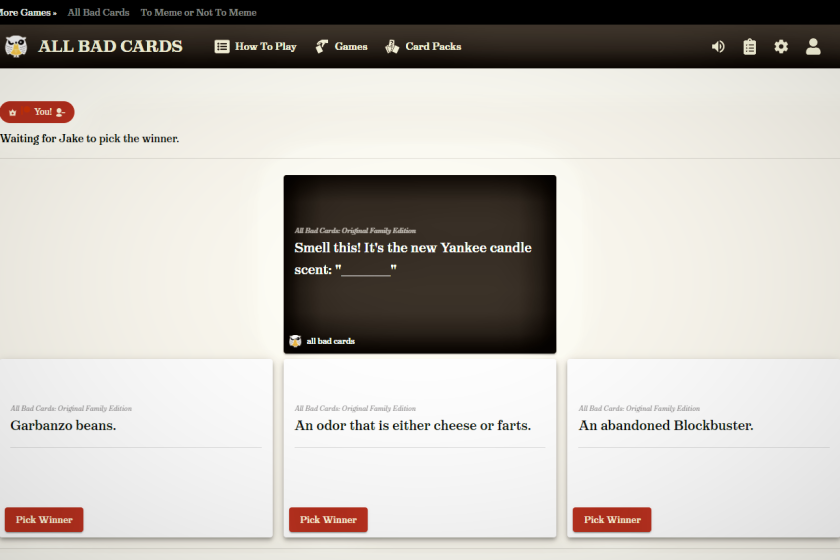