There already wasn’t going to be a National Pro Fastpitch championship this season. With softball making its return to the Olympics, NPF had to alter the way it was going to play in 2020. After all, three of the teams in softball’s pro league are national teams. The Olympics were […]

There already wasn’t going to be a National Pro Fastpitch championship this season.

With softball making its return to the Olympics, NPF had to alter the way it was going to play in 2020. After all, three of the teams in softball’s pro league are national teams.

The Olympics were postponed to 2021 due to the pandemic, and NPF canceled its season. Next year, it’ll have to make another adjustment to losing the bulk of its players.

“That’s pathetic, but that’s the truth.”

Women’s sports are often viewed as a charity case or a cause, with publicity or coverage as a favor instead of being newsworthy on its own.

Every professional sports league has a form of struggle during a health crisis, but many have pointed towards women’s sports as an example of impending doom.

While they have difficulties wealthy men’s leagues might not face, a pause isn’t necessarily a harbinger of doom.

“The league itself doesn’t operate at a loss,” Kempf said. “But I would say, for us, the huge challenge is the world, specifically the United States, does not embrace women’s professional sports the way they do men’s sports, and that alone is why we’re down. The pandemic hit us and that’s terrible, but it has more effects on those living lavishly, like men’s professional sports.”

Summer leagues like the NPF, Women’s Football Alliance, and Women’s Pro Lacrosse League canceled their seasons, while the WNBA and National Women’s Soccer League are trying to find avenues to play. The National Women’s Hockey League lost one game, its championship, and is hoping a mid-November return will give them a full schedule.

Preparing for that far down the road with no idea what sports look like, though, is doubly challenging for leagues that don’t have the same near-unlimited cashflow of billionaire men’s leagues.

“In general, when you look at the women’s professional landscape, it’s an uphill battle,” said WPLL commissioner Jen Adams. “Our players are our driving force, so during this time we look at what’s taken away from us, but we try to take perspective on what can we do better. How can we drive that conversation, then when we do come back, how can we have a better product.”

WFA had already made down payments on much of the components needed for a season. Unlike the other elite women’s leagues, the WFA operates at a semi-pro level, with payment and compensation coming from individually owned teams on their own discretion.

Missing a season hurts the bottom line as far as ticket sales, merchandise and for some teams, compensation, but some of the overhead costs saves keeps the league in the same spot as if there was a season.

That doesn’t mean the costs are zero, though.

“A lot of stuff was already bought before (the season) so that put us in a bind,” said WFA commissioner Lisa King. “The first half of the season is prep work, getting insurance set, getting the game balls to everyone, then the revenue comes later on. That hurts.”

As a non-profit league, they leave it to the teams themselves — which are for-profit — to pay their players, but the league has their own travel fund to give to playoff teams. Instead, that will go into next season.

The biggest blow for revenue comes from losing ticket sales for many leagues, which aside from the NWSL and WNBA, don’t have lucrative television contracts.

The other notable difference is merchandise sales. Trying to get a player jersey or other gear isn’t as accessible as locating the team store online and shelling out a couple hundred dollars to wear a men’s league jersey. For many women’s leagues, the majority of their merchandise sales come from being at the arena.

“Chicago leads the league in attendance, so it’s impactful there, not just being at the venue and buying a ticket, but they lead in jersey sales,” Kempf said. “The overwhelming percentage of sales is in the park. While they’re at the game, not online. There’s a trickle down there. Chicago Bandits gear isn’t being sold at Macy’s.

“It’s another lack of presence.”

If sports return without fans into next year, women’s leagues might lose out the most due to the lack of TV deals along with merchandise sales going down.

Leagues that don’t operate in the summer, though, are taking the time to project what a post-coronavirus world means for them.

“It’s premature to speculate because the next game is over five months away,” said NWHL commissioner Dani Rylan. “But we are starting to think through various scenarios.”

That’s not a ton of revenue lost, just from it being a single game where they would have sold around 800 tickets at Warrior Ice Arena in Boston. The NWHL is fortunate it can look ahead with a normal offseason, but uncertainty has them keeping their eye on how the other leagues fare.

“We’re mindful it’s a challenging time on a lot of businesses,” Rylan said. “We’re focused on season six and what we can do to make that season as successful as possible. … It’s different for sure, but it’s a challenge we’re ready to face head on and control what we can control.”

Rylan said the NWHL will announce at a later date how players will be compensated as far as bonuses for the Isobel Cup game that was never played.

The WNBA — which did not return a request for comment — announced last week it would host a shortened season at IMG Academy in Bradenton, Florida, not far from its male counterpart, the NBA in Orlando.

Of all the women’s pro leagues, the WNBA is the most popular and lucrative. With a meteoric rise in viewership over the past few seasons, its likely the league will have a larger audience especially in a time where there isn’t an oversaturated sports market, and plenty of demand.

Not every league is in a position where they can host a season or capitalize on a window where less-viewed sports get more airtime.

“To some degree, there’s stuff we don’t have to deal with that other leagues are dealing with,” Adams said. “But it’s a decision not made lightly, this is what those players do, they play professional lacrosse and we’re their platform. We understand the ripple effect on players and what it does to them, a lot of them are training for their World team. Taking that opportunity away from them, we have to be creative for them.”

The WPLL is a touring model and has a partnership with the men’s Premier Lacrosse League to share some platforms and play games at the same arenas, so they don’t have to worry about canceling arena dates.

A fledgling league in its own right, though, the WPLL doesn’t have the resources to put on a season and gain notoriety during a time most sports aren’t being played.

For now, Adams said players can sign up in a virtual portal to use the WPLL platform for lacrosse education, and they can be compensated for that.

The NWSL’s tournament at the end of June will serve as the guinea pig for all sports — men’s or women’s — which puts them in the national sports spotlight.

It’s not often the women’s stars shine the brightest, and it’s certainly an opportunity.

“We’re using organizations like the NCAA or NFL, they have more money so there’s more pressure to have a season,” King said. “Each day, each week, we’re assessing what they’re doing. We don’t have the money to test every player every game or practice, we don’t have those resources, but we’re using them as a guide.”

King said the WFA is going to try to host a player’s event in the middle of fall which will be optional for players and if it’s deemed safe enough.

She stressed, though, that players have a choice to play or not. In the men’s landscape where players are chastised for being paid millions but prioritizing their safety, women’s athletes don’t have that pressure.

They also have more agency to decide what they want to do, but it comes at the cost of their existence still being relatively in the dark.

“There’s not as much pressure for us to play,” King said. “I think everybody knows a lot of things are more important than women’s football, like families and trying to make an income. If you have to give up a season to keep your community safe, by all means that’s what you have to do. You don’t want to put anyone in the position to have to make a choice.”

'This is where the future is going:’ Amazon Executive on $2 billion Climate Pledge Fund

Tue Jun 23 , 2020
Amazon (AMZN) launched a $2 billion venture capital fund Tuesday to invest in technologies and services aimed at reducing greenhouse gas emissions. Speaking to Yahoo Finance, Amazon’s Head of Worldwide Sustainability Kara Hurst said the move was yet another step to use the e-commerce giant’s “scale for good” as it […] 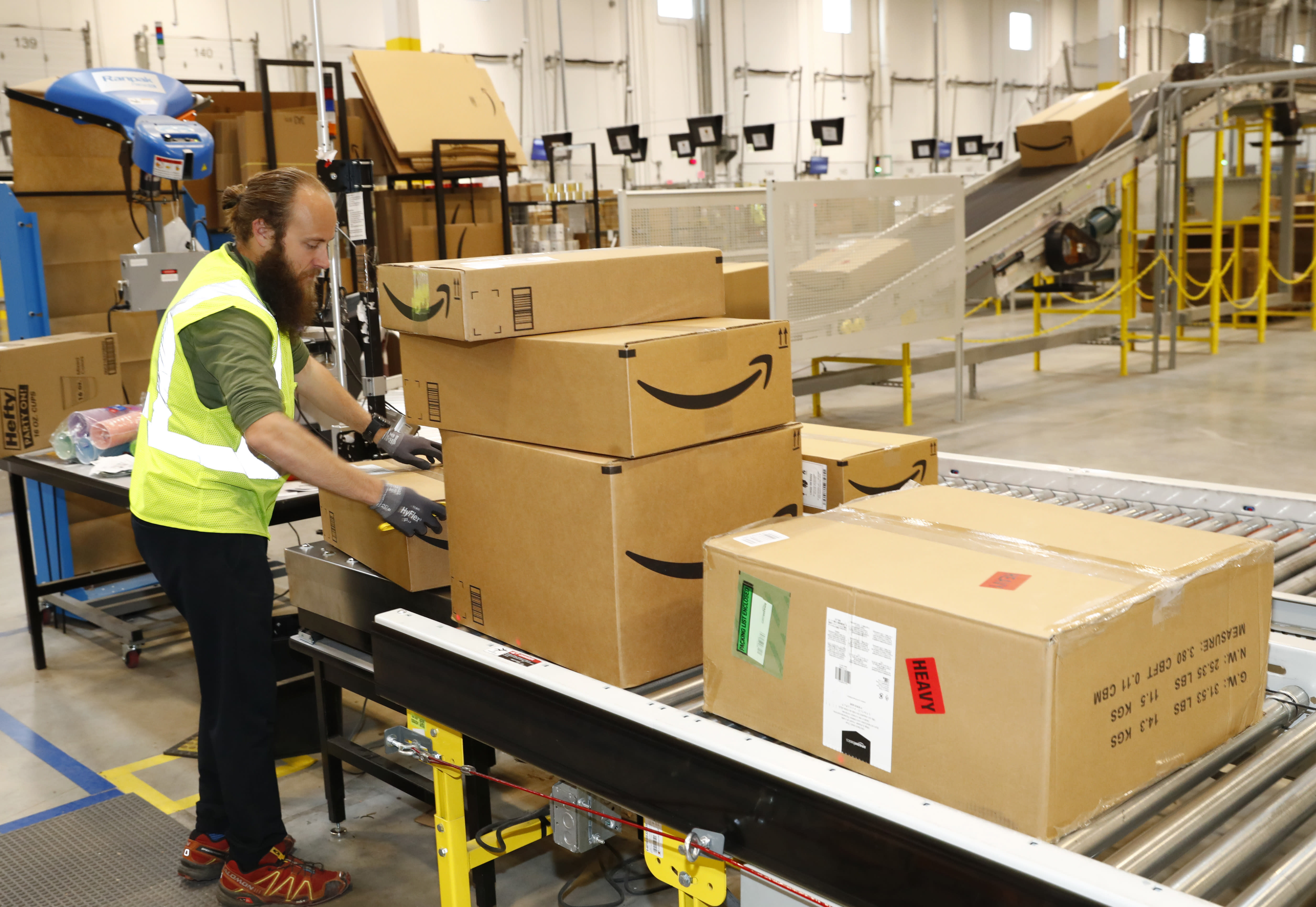