CLOSE Are you feeling practical? We’re just a few weeks away from Black Friday and intense holiday shopping time during an era of COVID-19. Do you know what you’ll be purchasing?  Stephen Baker, a longtime analyst with the NPD Group, which tracks sales of consumer products, says to expect a […]

Are you feeling practical?

We’re just a few weeks away from Black Friday and intense holiday shopping time during an era of COVID-19. Do you know what you’ll be purchasing?

Stephen Baker, a longtime analyst with the NPD Group, which tracks sales of consumer products, says to expect a holiday filled with non-sexy products like computer monitors, external mice and keyboards and routers. Yes, routers.

“You’re not going to give a spa certificate or holiday tickets to Bermuda,” said Baker. “Instead, we’re seeing more tangible gifts like a router. Give your family the gift of better internet connectivity.”

This year, the pandemic has put a twist on consumer electronic sales. Shoppers have already pushed huge sales gains for products that make it easier to work and learn from home, Baker said.

Baker sees that trend continuing for the holiday shopping season, where the next generation video consoles from Sony and Microsoft (PlayStation 5 and Xbox 5) are expected to be the hardest to get. New iPhones, while not generally gifts, will actually be the biggest sellers of the holiday, along with Apple AirPods and other headsets, per Daniel Ives, an analyst with Wedbush Securities.

What else is hot?

► TVs traditionally are the best sellers for the holiday, as consumers opt for the bargain prices. Baker said to expect many 65-inch sets for as low as $250, and even larger ones to be heavily discounted.

► Computer monitors. Baker said this is the fastest growing category in consumer electronics. “Kids want a bigger screen when they’re doing education at home, parents are adding second or third screens to their home setup for work. Screens are clearly much more important than they’ve been before.” (Laptops have been a big seller all year long and hard to get, but don’t tend to be purchased for the holidays, Baker said.)

► Streaming sticks. With virtually every TV being a “smart” TV with built-in streaming now, you could expect for sales of the Roku and Amazon Fire TV streaming sticks to take a hit. But no, said Baker. They will continue to be among the most popular products. Sales are already up 40%, and for the past several years, Amazon traditionally lists the Fire TV streaming stick as one of its top sellers at holiday time. “There are millions and millions of older TVs,” said Baker. “And maybe you got a smart TV, but don’t like the interface, so you replace it with a Roku.”

► Smart speakers. Amazon traditionally massively discounts the Echo speaker line during the holidays, but so far this year, Baker hasn’t seen a “huge jump” in sales for these products during COVID times. That said, he expects Apple’s HomePod Mini, it’s first consumer priced smart speaker, at $99, to be a big seller, fueled by Apple’s marketing muscle. All of Apple best-selling products, from iPhones, iPads, Macs and Apple Watches, have seen a boost from pandemic-era customers, the company has said.

► Smart home devices. These products have been heavily touted over the last few years, but getting smart locks and other automation products to work can take some skill. Baker says none of them are particularly strong sellers, except for the video doorbell category, which monitors what’s going on outside your front door. Those products have seen a 30% lift this year, he said.

Meanwhile, the Black Friday of your memory, the one of massively discounted TVs that serve as “doorbusters” to bring in hundreds of people will be a thing of the past this year.

The Centers for Disease Control and Prevention classified “shopping at crowded stores just before, on or after Thanksgiving” on a list of higher-risk activities to avoid and in guidance issued ahead of the fall holidays also suggest more online shopping.

Standing in line to get an early jump on doorbuster sales is likely to be a thing of the past. (Photo: Target)

Neil Saunders, managing director of the retail consultancy Global Data, said the idea of any retailer driving crowds of people into their stores is a “non-starter.”

“No retailer can run the risk of overcrowding, and so all will be looking to balance the need to drive sales with the need to keep people safe,” Saunders said.

But have no fear, the lines and doorbusters will be back next year, Baker says.

“When people shop in store, they tend to shop more, and buy more expensive things,” Baker said. “So this is something they want to return. Next year, I would expect there to be some interesting things for you to buy the day after Thanksgiving.”

In other tech news this week

Pre-orders starter for Apple’s iPhone 12 Mini and 12 Pro Max Friday, as well as the new HomePod Mini. The iPhones go on sale at stores on Friday, Nov. 13, while the HomePod is slated for Monday, Nov. 16.

The gig economy lives on, thanks to a closely watched California proposition. Uber, Lyft and other app-based ride-hailing and delivery services spent big to preserve their business model by keeping drivers from becoming employees eligible for benefits and job protections. And they won. The outcome was a defeat for labor unions that had pushed for a state law aimed directly at Uber and Lyft, mandating they provide drivers with protections like minimum wage, overtime, health insurance and reimbursement for expenses.

Responding to YouTube’s policies on misinformation.

Why the UK's carbon-free future will need rules

Sat Nov 7 , 2020
Windfarm above Tal-y-bont, Rheidol Valley, Wales, UK. ( A 10-point plan aimed at putting the UK on track for a zero emissions economy is due to be unveiled by the prime minister in the coming weeks. Boris Johnson’s previous speeches on climate change have given the impression the problem can […] 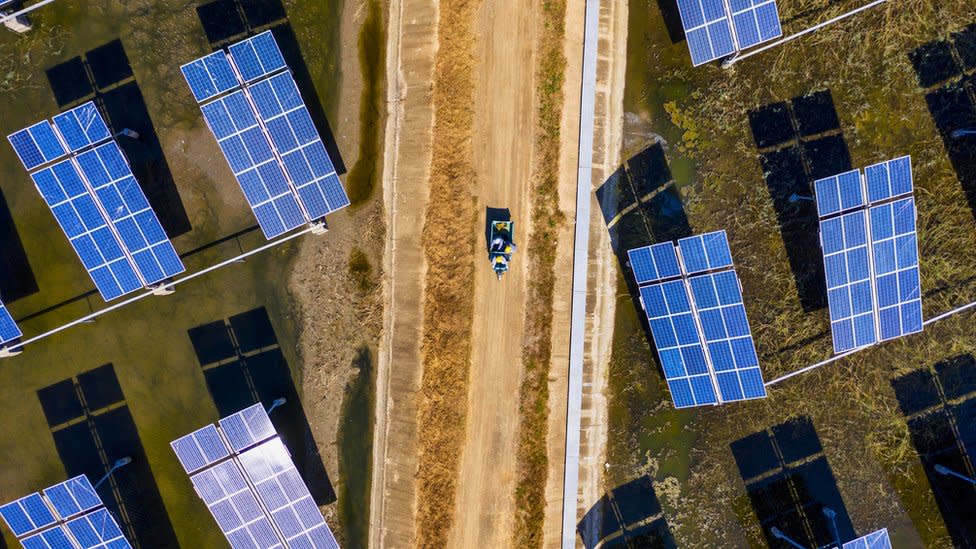